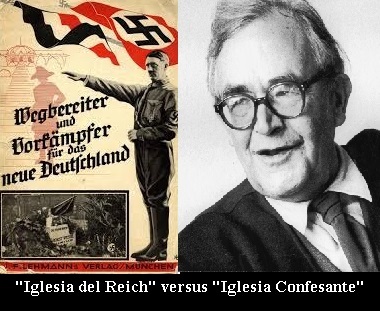 On the book of Georges Casalis, The meaning of a life. Part I, synthesis pages 17-47. Notes of Contemporary Theology.

He was born in Basel (Switzerland) in 1886, in the bosom of a Christian family (Father Theologian). He wrote all the material he gave in class to his students. In 1927 publishes Prolegómenos and in 1932 decides to rewrite it to improve it. I felt teaching as something of great importance and responsibility. He studied in Germany, Modern Theology, which focuses more on the believer-God relationship than on the person of God himself (His teachers Harnack, Scleiermacher, Gunkel, Schatter, W Herrmanne (Neo Kantianism) influenced a lot about Barth.
All this formation makes him a theologian linked to the criteria of historical science and with an anthropological message of religious experience. He has a lifelong friendship with Thurneysen. Aware of materialistic philosophy (Marx) and the science of his time, I sympathized with the labor movement and was a Social Democrat deputy from 100-1906, this convinced him that the changes would come on the path of faith rather than politics And dedicated to the pastorate and the teaching.

In 1909 he began to serve in the Swiss-German Congregation of Geneva.

In 1922 he was appointed Professor of Theology at Gottingen University. The Theology for Barth is the product of the reflection of the preacher and of the Church about his own message. The Church is a people of witnesses who preach the Gospels. The task of theology is to remind the Church of its mission and give it the content of its message. This same year founded the magazine Zwischen (that is published until 1933) along with his friend Thurneysen. In 1926 he went to Münster (Westphalia) as an independent theologian, published two commentaries (Corinthians and Philippians). In 1927 The Doctrine of the Word of God and prolegómenos to a Christian Dogmatic that 1932 will begin to rewrite and will be inconceivable. In Bonn he writes The Proof of the Existence of God by Anselm of Canterbury.

Trying to make understanding is part of theology, not because understanding or intelligence is necessary to ground faith, but because the essence of faith is to desire knowledge (of God). Barth, a Master who teaches to think!

1933 The National-Socialism of Adolf Hitler. The Catholic Church signs an agreement with the Nazis in 1934 (sign the agreement Von Papen and Cardinal Pacelli), where they basically commit not to participate in politics. The Evangelical Church was divided, the Lutheran Church had a natural inclination to submit to the governing authorities, but in addition many of its leaders sympathized with the national socialism.

The "Evangelical Church" of the German Nation was created in April of '33 with the following statement: "A powerful national movement has taken over our people and has enthused it. A vast reform of the Reich manifests itself in the Alamana Nation, which is magnified. At this point in history we say a grateful Yes. God has given us "The movement of the" German Christians "take the Nazi" Nation, Race, Führer ", the" Evangelical Church of the Reich "German Christians of the Aryan Race, followers of Luther ... In this state of" Church "together with his friend Thurneysen launched a 2nd" Today's Theology "magazine where they directly attacked the" Deutsche Christen ", the" Reich Church "which had implemented the" Aryan paragraph "(Arierparagraph) , Which would exclude all believers with Jewish ancestors.

An example from the publications of Barth-Thurneysen's magazine: "Where it is understood that Jesus Christ, and He alone is the driver, there is a true theological existence ... Where there is no theological existence, where an ecclesiastical conductor is claimed instead of Driver to the service that is ordered to us, there every appeal to a Führer is as vain as the cry of the priests of Baal: "Baal, answer us"

The Confessing Church (Bekennende Kirche) of Niemöler [1] rose then against the official Church of the Reich, the German Christians.
In 1934, in the city of Barmense wrote "The Confession of Barmen" (the authorship is of Barth).

"Facing the errors of German Christians and the Reich Church government that wreak havoc on the Church and tear apart the unity of the German Evangelical Church, we confess the following evangelical truths:" ... The universal priesthood, fundamental equality of All Christians before God, rejecting the application to the Church of the Fürhrerprinzip [2]. Lasoberania of the Word of God in relation with the laws of the State "Then emphasizes the independence and the Church of all ideology or propaganda.
In 1935 he is driven from Germany and returns to his native Basle, where he works in the "Christian Resistance" giving foundations to the whole World. Between 1938 and 1942 he wrote Letters (of a prophetic character) to the Churches of the World, warning of the problems that Nazism is going to cause to the whole World.

The fall of Germany in 1945 was so emphatic that the Confessing Christians related it to the Fall of Great Babylon, Barth calls all Germans to the spiritual reconstruction of the Nation, which ended up being one of the greatest victims of Nazism: Devastated and divided among its enemies. On this he writes The Healing of the Germans and the Germans and us where it deals precisely with the problem of the reconstruction of Christianity in society based on The Word of God.

KARL BARTH, BIOGRAPHICAL NEWS. BY FABIAN MASSA.
On the book of Georges Casalis, The meaning of a life. Part I, synthesis pages 17-47. Notes of Contemporary Theology.


[1] He graduated as a naval officer. During the First World War he was in command of a submarine. After that war he commanded a battalion in the Ruhr Region. Between 1919 and 1923 he studied Theology in Münster. At the beginning of his religious activity, he supported anti-Semitic and nationalist anti-communist policies; however, in 1933, he reacted against those ideas after Hitler developed a totalitarian policy of homogenization (Gleichschaltung) which sought to impose on the Protestant churches the "Aryan paragraph" Arierparagraph), which would exclude all believers with Jewish ancestors. Following this measure, Niemöller founded with Dietrich Bonhoeffer the movement of the Confessing Church (Bekennende Kirche), a Protestant group that strongly opposed the Nazification of the German churches.

[2] Führerprinzip is a German term translatable as a principle of authority, boss principle or principle of supremacy of the boss, "caudillismo", "absolute obedience."