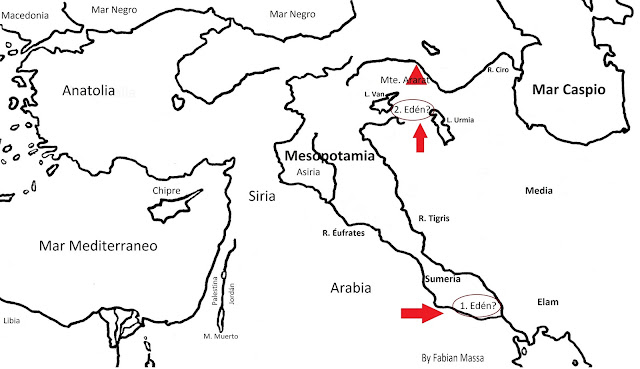 The book From Eden to the Nations is a study of the first eleven chapters of Genesis, which could be defined as Biblical Prehistory, since there are no documents to date events until Genesis 12. Section Genesis 1-11 (Gen.1- 11) encompasses the Creation of God and the Origin of mankind in Eden (present-day Iraq), the Fall of Man (Gen.3), the Empire of Evil, which is destroyed by the Universal Flood (Gen. 9), Recreation of the planet and the emergence of a New Humanity, which grew into an advanced society (Sumeria?) That founded the First Post-Diluvian Empire (Nimrod's 1st New World Order - NWO) and also planned And executed the construction of the Tower of Babel (Gen.10 and 11); The failure of this project and the subsequent Dispersion (after the Battle of Babel Gen.10) that defined the Nations from that moment until the present time.

On this occasion, I share one of the topics discussed in Chapter I
Did God create a single pair of humans or a large humanity? Interpretation of Genesis 1.27
From the first account of Creation (Gen. 1.1 - Gen. 2.4A) basically two interpretive positions of Genesis 1.27 are derived, depending on which version of the Bible one has formed.
Thus we have, that formed with the Reina Valera Revision 1960 (RV 60), traditionally interpret the word man as the first and only man created by God.
And God created man in his own image, in the image of God created him; Male and female created them. RV 60


This is complemented by the reading of the second account in which God makes Adam of the Earth:
Then Jehovah God formed man from the dust of the earth, and breathed into his nostrils the breath of life, and man became a living being. Gen. 2.7

The Textual Bible [1] clarifies that in Gen. 1.26 the word translated "man" is a common noun (generic to be taken for humanity) and not a proper noun (name) [2].
Then, in Gen. 2.19 [3], RV Version 60 translates "man" - common noun - as "Adam" (proper noun: name). Scholars of the translation of the Textual Bible explain that just after Gen. 4.1 the word adama should be taken as the proper name [4]. And the LORD God formed every beast of the field, and every bird of the heavens, from the earth, and brought them to Adam, to see how he should call them; And all that Adam called the living creatures, that is his name. Gen. 2.19 RV60
Thus the interpretation that in principle makes a lot of believers, is that God made one man and one woman and that from the union multiplied all Humanity. Now, if the person starts from another translation of the Bible, such as:
The New International Version (NIV) and read the same passage
And God created the human being in His image ...
Or if we take the Peshitta Bible [5]
So God created the Human race ...
From the comparison between these translations, we can understand that God created a humanity to which He blessed to multiply and fill the Earth (Genesis 1:28)
The translation man of Gen. 1.26 and 27, corresponds to the Hebrew term Adám (Strong 120) that means: Reddish, a human being or the human species, male, people.

The Caribbean Dictionary comments [6] (extract):
ADAM The Hebrew word adam appears more than 560 times in the Old Testament and almost always means "man" or "human being" (Gen. 7.23, 9.5, 6). ... the narrative of creation (Gn 2.4ss) associates it with `ādama, earth (female form). In this way, it establishes a fundamental link between the human being and his environment. Taking the term Adam and translating it man is not suitable in all the passages where it appears. Much better is to translate it into a human being, humanity. The New Jerusalem Bible [7] thus translates Gen. 1.27: "God created man, in his image he created him, male and female he created them." Woman is also creation of God and therefore subject, person. Even when Adam is used in a personal sense referring to the fellow man of Eve (Mother of all living, Gen. 3:20), both Adam and Eve are also generic names and indicate to all mankind [8].

In Genesis 1.26, the Hebrew Bible Stuttgartensia [9] in Spanish translates:
Then said Elohim, Let us make man in our likeness, and have dominion over the fish of the sea, and the fowls of the air, and over the cattle, over all the earth, and over every creeping thing that creepeth upon the earth.
Note that they exercise is the third person plural (they) therefore it must be understood that man is being used as generic (humanity).
The Adam is Community

Returning to the Strong RV 60 concordance for the word man, in Genesis 2:19, 20, 21 and 23 we read:
Adam (Strong 121) Name of the first man. "Adam, Adam.
The New Nelson Dictionary provides the following information: For centuries Christian tradition has seen in Adam a particular male person, a man. However, Adam is a masculine noun but not necessarily equivalent to man. To better understand the meaning of Adam we must understand that Adam involves both sexes and more importantly, it involves a relationship between people. Adam is community; This is the fundamental thing.
Claus Westermann says: "In Gn 2.4b-24 this community (man-woman) constitutes the purpose of the narrative: the human being formed by God from the earth (2.7) is not yet the creature God intended (" it is not right ... "); Only after the creation of women has the creation of the human being been truly achieved. "[10]
Regarding the names, in Gen. 2.23 Adam becomes self-ish (male) and gives the woman the name Isha (RV60 Varona). With regard to his wife, the man says in Gen. 2:23: ... now is bone of my bones and flesh of my flesh [11]
Let us apply these concepts in the development of the story about the creation of humanity, in the passages of the book of Genesis 1.26 to 27 and Genesis 4.9 - 17.