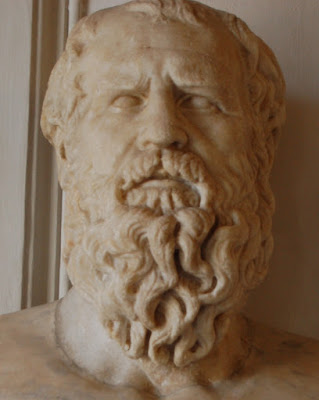 At the end of the 7th century it was born in Miletus, a Greek colony of the coast of Ionia (Asia Minor, Asiatic Greece - today Turkey) arose from the hand of Tales (625/624 BC - 547/546 BC) Philosophy and scientific thought, as opposed to Mythology and Greek religion, philosophy seeks knowledge in the observation of Nature independently of the myths.
For the philosophers of Miletus, the Universe is ruled (governed) by an active principle (Arjé), from which everything arises and to which everything returns.


For Thales was the Water; For Anaximander [610 a. DC. 547 a. C.], disciple of Thales, the Appeal that is immortal and indestructible, unengaged and imperishable, but from him are generated all things. Everything comes out and everything returns to the apex according to a necessary cycle. For Anaximides [585 a. C.-524 a. C.], disciple of Anaximander, the arche was the air.

In Heraclitus (544/1 - 484/1 a .C) It is the logos, Reason that governs the Universe and that makes possible the existence of order and regularity in the sequence of things; But it is also present in us and should serve as a guide for our conduct and as an instrument for knowledge. The Stoics pick up this Heraclitean tradition by considering that the Logos is the divine principle that creates, dominates and directs Nature and the entire Universe. Along the same lines, Jewish and Christian theology enriches the concept with its own characteristics. In the Fourth Gospel appears the logos or Verbum or the Word, but attributing to him a personal dimension alien to the Greek concept. Http://www.e-torredebabel.com/History-of-the-filosofia/Filosofiagriega/Presocraticos/Logos.htm.

Heraclitus of Ephesus defends in the first text the existence of a Logos that penetrates the totality of the cosmos and is present in the human soul, being this Logos or Reason of which we participate the instrument that we must use to guide our knowledge and conduct.

In John 1, the Apostle proposes to the Churches of Asia Minor the idea of ​​Jesus - God Himself as the creative Logos who vivifies and enlightens the whole of the Universe and the human world.

The Logos of the Greek philosophers is impersonal, John's contribution is to give the identity of Jesus Christ, which was from the beginning, before the dust of the World (proverbs 22.8) since the Logos is the author of all things John 1.3)

Week 70 is about to begin, and many still refuse to recognize the one who created everything and rules from eternity. The Logos is coming back soon, are we ready?