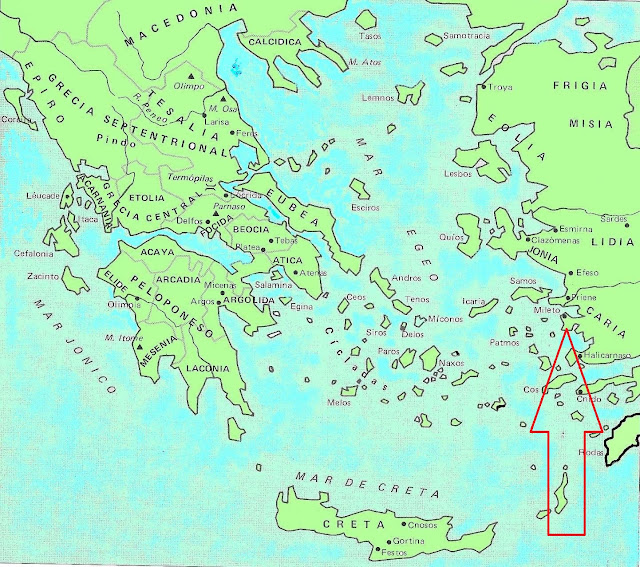 In the Mediterranean islands between the coasts of Greece and Turkey there are a lot of Islands. In them their inhabitants of Hellenic origin developed the navigation and with this the commerce. They traveled and settled on the coasts of Europe and Asia Minor, founding colonies. One of these Greek colonies established the city of Miletus, located on the coast of present-day Turkey, in the region formerly known as Ionia.

The port of Miletus received vessels from all over the world known of its time and also caravans that came by land. The city prospered on the basis of trade and the great number of cultures began to be known.


The form of government of Miletus was common to that of the other Greek Polis, a pure democracy, that is to say where each free citizen directly presented his opinion and defended the same one in the Popular Assemblies, where it was hotly discussed among the citizens the policies to follow In each city-state.

Economic prosperity was (and is) a condition for the development of freer activities, not tied to the satisfaction of immediate or basic needs. Trade acted as a dynamist of change, because it involves not only an exchange of values ​​and goods between men of different regions, but also of their beliefs, myths and culture in general.

The Milesians, were in contact with so many different cultures, and began to take transcendence to their own myths and beliefs. Not being able to trust common customs and values ​​led the Milesians to develop their rationality, that is, to try to explain the World independently of myths or any other element of divine origin (Emergence of the Logos).

It can be said that these three factors, a) Economic prosperity, b) Exchange of ideas and c) Freedom of expression and politics, were those that had a direct impact on the birth of philosophy and scientific thinking, that is, the passage from Myth to the Logos , Which implies the beginning of Western culture.

In our day, the Evangelical Church is generally moving within the less favored social sectors, which in Latin America comprise 60% of the population and in some countries at higher rates. If we want people to take a positive and committed attitude to study and research within congregations, it would be necessary to work in:

to. The congregation can improve its economic situation, to have the freedom to think about training and study. This is only possible if you have basic needs covered. This is very much in relation to what is seen in Latin American Theology, in seeing liberation both for the "here and now" and for the "beyond."

B. The possibility of an exchange of ideas. For that, a renewal is necessary ... in the first years of the Institute that he studied before he was studying at FIET, texts of Pablo Hoff and the manuals of Systematic Theology of Pearlman ... were used with fear and trembling at the beginning of the 20th century. If there is no flow of new ideas, they will not be forced to rethink their own ideas and beliefs.

C. Freedom of expression. There must be freedom of expression, freedom of opinion, freedom to think. There are congregations where there is only one "politically correct" way of thinking ... which is how the pastor thinks, read the pastor's version of the Bible, the Bible commentaries or literature authorizing the pastor, listening to pastors who are "friends" The pastor, etc ... I attended for years to a church where you could only study as far as the "Anointed One" authorized it.

These three ingredients, a) Economic prosperity, b) Exchange of ideas and c) Freedom of expression and politics, were those that had a direct impact on the birth of philosophy and scientific thought, and are the ones that will ultimately make it possible to grow in knowledge And freedom of any type of community. I am convinced that from Theology can be contributed so that growth in the ability to think is more achievable within congregations.