Reflection. "Do not blame the pig, but his who feeds him" sayings, folk wisdom. By Fabian Massa. 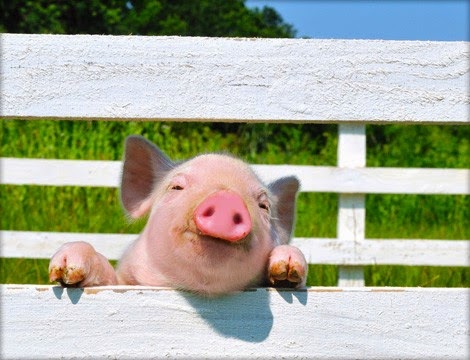 "The fault is not pork, but which feeds him."

One of the biggest struggles that have pastors in churches, at least in Buenos Aires - Argentina, is that 80% of the congregation not read the Bible. So even though the pastor should endeavor to make the best sermons for weekly worship, the congregation does not grow. The reason is obvious: They eat only the Word of God in worship and the rest of the week "fasting Bible."

Recently, one of the group leaders asked his brothers even read two verses per day. I take the job of making the account and at that rate it would take almost 40 years to read it all [1].

But the real problem is that the issue is not effectively attacked. For example, many people turn to cults or their group meetings without carrying his Bible, or carry cell and read it from there, which is not beneficial because this way no end to learn the order of the books and makes them very difficult to find the texts. Also very few (if any) lead to cults or group meetings a notepad and pen. But you can not ask the brothers to bring their Bible and take notes and study, because the official policy is not to impose any "burden" brother.

Then, as the congregation does not understand the sermons are increasingly simple, it is practically every single post enclosing an idea with no more than four or five verses can easily understand. At this rate, no need to clarify that there is virtually no growth in the congregation. And the vicious cycle is formed:

How the brothers read very little and usually fail to understand the texts, are given very short basic messages.
How messages are basic and very short brothers do not grow.

12.42 In Luke 46 there is an exhortation to feed fellow servants:

Where a faithful and wise steward, whom his master will put in charge of the servants is for you repartirles food in due time? 43 Blessed is that servant whose master, returning, finds him doing his duty. 44 I assure you that you will put in charge of all his possessions. 45 But what if that servant says to himself, 'My master is delayed in coming back, "and then begins to beat the menservants and maidens, and to eat and drink and get drunk! 46 The lord of that servant will come on a day that the man you least expect and when least expected. Then I will punish you severely and imposed the sentence with the unbelievers.

Teaching discipline for reading and studying the Word is also minister.