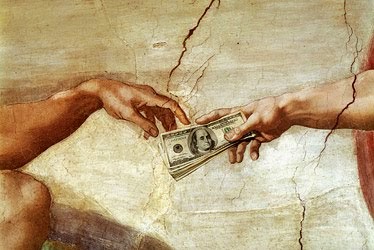 In these times of worship "Anointed of the Lord", the "Evangelism Prosperity" where Mega Pastors travel the world 1st Class, attending meetings surrounded by bodyguards, in expensive suits and luxury.

In these times where many confuse the blessing and support of the Lord with wealth and ostentation, measuring the "Anointing" according to the economic level of a congregation or the Pastor.

In these times of both "Power" where the "Vision" is to gather as many people as possible, where "Campaigns Miracles" which almost never happens any are made.

In these perilous time, both lost Apostle, What if you were to lift Peter or Paul?

When Peter and John as instruments of the Lord took the miracle of healing the lame door of the Temple of Jerusalem, called "The Beautiful" (Hch.3), Peter spoke thus to the beggar: "6 No I have silver and gold Peter said, but what I have I give you. In the name of Jesus Christ of Nazareth, rise up and walk "Hch.3.6 NIV.!

Neither Apostles had money, however the Church pastored Pedro was rich, "44 All the believers were together and had everything in common: 45 Selling their possessions and goods, and shared their belongings with one another according to the need of each ". Hch.2 44-45 NIV.

The Church was rich, but neither Peter nor John were flaunting wealth, did not even have money. But they had given to the beggar: "Power of God".

The same is true of modern prophets, moving as though they were Star Rock & Pop, but John the Baptist ate locusts (still in desert regions toast feet of these insects are eaten) and wild honey. Jesus speaking of him said:

24 ... "What they left the wilderness to see? A reed shaken by the wind? 25 If not, what went out to see? To a man dressed in fine clothes? Of course not, because those who wear expensive clothes and live in luxury are in royal palaces. 26 But what went ye out for to see? A prophet? Yes, I say, and more than a prophet. 27 This is he of whom it is written:
"'I will send my messenger ahead of you,
and he shall prepare the way. "[d]

"What they left the wilderness to see? A reed shaken by the wind? To a man dressed in fine clothes? That is, did it go to see a weak man? What a fine, fine man, richly dressed?

They had gone out to see a prophet, one who had been sent by the Father to proclaim the Son. But John did not seek fortune to have displays of any kind.

It's not about making a "Vow of Poverty", or feel sorry living in misery. But it is not good to make a cult of ostentation and luxury.

In the Bible there are 6 recommendations to be sober [1]:

1 1 Thessalonians 5: 6: Therefore let us not sleep as others do, but let us watch and be sober.

2 1 Thessalonians 5: 8 But let us who are of the day be sober, putting on the breastplate of faith and love, and the hope of salvation as a helmet.

3 Titus 2: 2: that the aged men be sober, grave, temperate, sound in faith, in love, in patience.

4 1 Peter 1:13 Therefore gird up the loins of your mind, be sober, and hope fully on the grace to be given you when Jesus Christ;

6 1 Peter 5: 8 Be sober, be vigilant; because your adversary the devil, as a roaring lion, walketh about, seeking whom he may devour;

Week 70 is about to begin in Iraq EI [2] is torturing, crucifying, beheading and burying alive Christians. The end times are close, the question is are we ready?