Reflection. Is there a risk of a global epidemic of Ebola? By Fabian Massa. 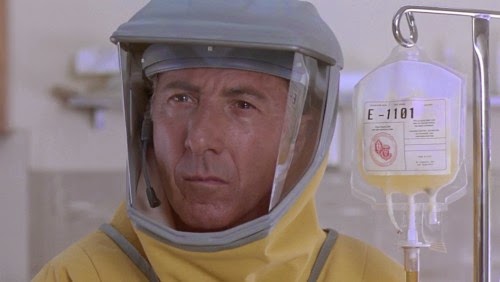 There will be so much evil, the love of many will grow cold.

In March 1995 it was released in the U.S. the movie Outbreak, in Spanish America was titled Epidemic. The film unfolds the story of an Ebola outbreak in the U.S. In fiction medical Sam Daniels (Dustin Hoffman) is responsible for the operation of containment.

This is the first outbreak of Ebola that emerged in West Africa and has already affected three countries: Guinea, Liberia and Sierra Leone, with 1323 cases reported since March in the WHO said yesterday. For this disease there is no treatment or vaccine or anything else to do but try to isolate infected people to avoid contagion.

Doctors Without Borders (MSF) warned yesterday that the epidemic is out of control and said that there is no overall strategy to manage it. "If the situation does not improve quickly, there is a real risk of infecting other countries," said Bart Janssens, MSF director of operations.

Concerned about the spread of the virus, the West began to take action. United States issued a travel alert for the three African states, reported the Centers for Disease Control and Prevention (CDC). In addition, the U.S. government increased controls at 19 airports in the country with international scales, for fear of a global epidemic.

It is a disease [1] relatively new, the first outbreak came in 1976 in the now Democratic Republic of Congo.

Scientists suggest that this outbreak is to be treated and controlled in the countries of Central Africa, where they appear regularly, because the levels of poverty and lack of sanitation by the lack of economic and health resources "is brutal."

Countries around the world are afraid of someone coming from some African airports where the disease has broken out and spread the virus mega hiperpobladas epidemic across cities.

They are now considering starting a fund of U.S. $ 100 million to control the virus (read "not out of Africa"​​).

They are now considering starting a fund of U.S. $ 100 million to control the virus (read "not out of Africa"​​). Was it lack die 729 Africans (and there is a risk of epidemic in America or Europe) for WHO formed this fund?

When man caring man ultimately takes care of itself. And if we neglect our neighbor we expose ourselves. Week 70 is about to begin and epidemics (and fears of them) are also a sign of the end times.


[1] The Ebola hemorrhagic fever is a viral http://es.wikipedia.org/wiki/Enfermedad_por_el_virus_del_% C3% 89bola