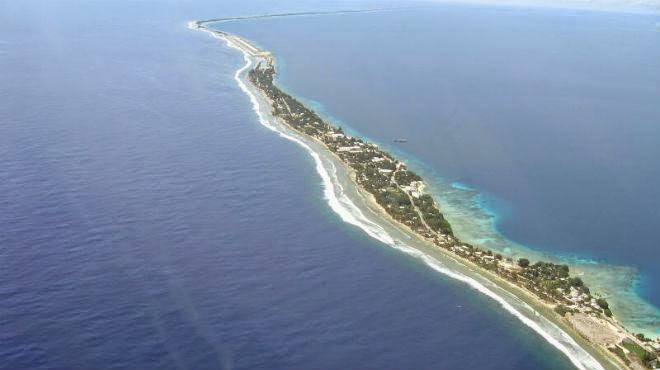 The Marshall [1] Islands lie to N.O. E of Australia and Micronesia. They are a group of islands, atolls and reefs spread over two islands (Ralik and Ratak) occupying about 1,000,000 km2 of sea surface, however the "Living Earth" will have just 176 km2.

De Brum said that climate change is a problem for the existence of his people and that urgent action is required. The highest point of the Marshall Islands is only two meters above sea level. And the ocean has eroded roads, destroyed homes and threatened farmland [2].

Global warming is causing the sea levels to rise, which, for countries such as the Republic of Marshall, Vanuatu, Maldives, Kiribati, Tuvalu and much of the Caroline Islands (All these territories are very low over the sea ​​level), is just a sentence away.
Jesus anticipated this to the disciples when he spoke of the signs of the End Times:

25 'There will be signs in the sun, moon and stars. On the earth, nations will be in anguish and perplexity at the roaring and tossing of the sea. 26 People will faint from terror, apprehensive of what is coming on the world, for the heavenly bodies will be shaken. 27 Then shall they see the Son of man coming in a cloud with power and great glory. 28 When these things begin to happen, stand up and raise your heads, because your redemption draws near. Luke 21.25 - 28 NIV

These Signs of the End depart published in newspapers, but many times we overlook, without reference to the Word. We need to be alert, Jesus said:
-Look at the fig tree and all the trees. 30 When they sprout leaves, you can see for yourselves and know that summer is near. 31 Likewise, when you see these things happening, know that the kingdom of God is near. Luke 21.29 NIV.

"Time of Grace" is about to end, Week 70 is about to begin. The prophecies were given to believe that seeing its fulfillment in God. The first things have already been fulfilled and missing are approaching. In Jesus we have salvation. Are we ready?