Reflection. "Peace and Security" A sign of the End Times. By Fabian Massa. 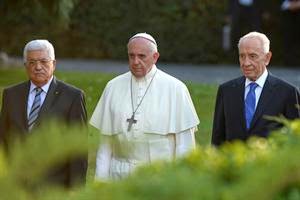 Today, June 8, 2014, around 18.15hs will be held in the Vatican Gardens, a meeting between the Pope Francis I with Peres, Abbas and a group of rabbis, Christian religious leaders and prominent magnets, to encourage peace all Jews, Muslims and Christians worldwide "believers.

According to the newspaper La Nación [1], "the ceremony will have a special format that respects the three religions, in which each reading was done according to each religion," the Israeli statement. The ceremony will conclude with the words of Francisco, Peres and Abbas, which shall not contain political, but also spiritual reasons and invoke the desired peace and brotherhood among peoples. also urge participants to stop using the name of God with violent or terrorist purposes. "


From the point of view of the world, the meeting is more symbolic than political, however, is another spiritual reading: Authorities in the exercise of their charges, each group represented, it will be put under to discuss alliances, and they will pray to God declaring words of Peace, so that people can live in safety. When an authority [2] states on something that was already announced in the Scriptures, are enabling prophecy.

In this case the prophecy speaks of an agreement on "Peace and Security" will be the beginning of the 70th Week of Daniel [3]
For one week 27 He will confirm a covenant with many, but midweek will end the sacrifices and offerings. On a wing of the temple commit horrible sacrilege, until you come upon the disastrous end that has been decreed. "Daniel 9.27 NIV

And also:
3 When people are saying, "Peace and safety" will come on them suddenly destruction, as you come upon a pregnant woman's labor pains. NIV 1 Thessalonians 5.3.

Let verse by verse:
For a week that ruler's prophecy speaks of a "week" of years.
It will make a covenant with many already see that at the meeting of the Vatican Gardens are represented many people around the world: Catholics, Christians, Jews and Islamic.

But midweek will put an end to the sacrifices and offerings is the Covenant that will work well for the first three and a half years. Then the guarantor of the Covenant will turn back and break ecumenism, initiating a chase Jews and Christians.

On a wing of the temple commit horrible sacrilege, until you come upon the disastrous end that has been decreed. Jesus himself recommended to pay special attention to the prophecies of Daniel [4], and as we have seen in other post, past events serve to understand how the prophecies will be fulfilled in the future.

The first time it happened to this prophecy was in 167 BC, the 25th of the month Kislev (November-December). The Syrian king Antiochus Epiphanes offered a pig on the altar to the Greek god Zeus by the Temple Mount in Jerusalem.

The destruction of Jerusalem Christ prophesied in Matthew 24:15 and the Temple of Herod in Matthew 24.2. This happened when the Roman armies took Jerusalem in 70 AD They demolished the Temple until "no stone left unturned" and led to a diaspora Jews that lasted more than 2,000 years.

Shortly before Christ returns to earth, armies will surround Jerusalem once again for the "Last Battle [5]" (Luke 24:16-22) and pass another "abomination."

3 When people are saying, "Peace and safety" will come on them suddenly destruction, as you come upon a pregnant woman's labor pains. The destruction biblically known as "The Great Tribulation" will last 1290 days (ie three and a half years) as it was prophesied by Daniel:
11 A from the time that the daily sacrifice and the abomination of desolation is set up, it will take 1290 days. Daniel 12.11 NIV.


Peace and Security the start of Week 70.