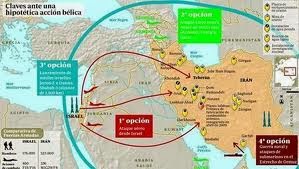 Israel against the possibility of attack "In Solitude " to Iran. Netanyahu threatens to " enlighten " the Nations [1 ] .

On Thursday 28/11 /13 Israeli Premier Benjamin Netanyahu during a visit to the Western Wall , said his priority is to prevent Iran from getting a nuclear weapon. " If possible , we would prefer to go through diplomatic means , but if not, we shining a light to the nations ," he said . So the military option -un solo Israeli attack on Iran [2 ] - is back on the table.


Middle East is a delicate balance , a direct action by Israel against Iran undoubtedly unleash widespread conflict or even the 3rd World War. According to the Biblical and Quranic [3 ] prophecies , before the 2nd coming of the Lord will unleash a war with nuclear weapons in the Middle East, which is necessary for the Antichrist and the False Prophet scenario arises . Achieved to sign a treaty for seven years bring " Peace and Security" [4 ] . But after three and a half years , will break the treaty and begin the Great Tribulation :

5 A beast was allowed to speak with arrogance and utter blasphemies against God, and was given authority to act for forty-two months [5 ] . 6 And he opened his mouth to blaspheme God , and to slander his name and his dwelling place and those who live in heaven. 7 You are also allowed to make war on the saints and to overcome them , and he was given authority over every tribe , people, language and nation. 8 A worship the beast all the inhabitants of the earth whose names have not been written in the book of life, the book of the Lamb that was slain from the creation of the world .
9 He who has ears , let him hear .
10 that is to be taken captive ,
to captivity he will go .
He who must die by the sword,
the sword will die.

This calls perseverance and faithfulness of the saints ! Revelation 13.5 to 10. NIV .

Faithfulness and patience ( ability to withstand ) consist of Christians not give up the faith despite persecution, imprisonment and death .

Week 70 is about to begin , according to Scripture, the Church (at least in part) if you enter the Great Tribulation. Are we ready ?