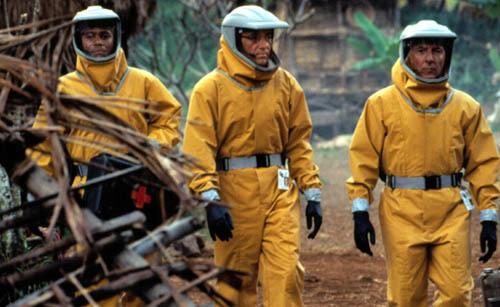 The event 3 of the BBC documentary "The Last Day", also called Four ways to end the world, is a global pandemic that kills thousands of people [1]. "


First let's look at the definition of a pandemic.
A pandemic, from the Greek word pandêmon Nosema, from παν (pan = all) + δήμος (demos = people) + Nosema (= disease), a term that means disease of a people is the involvement of an infectious disease of humans along a geographically extensive. Etymologically speaking should cover the whole world and affect all [3].

In the post "The Four Horsemen of the Apocalypse" have touched on this subject [4] now more timely focus.
Here I copy a historical listing published on Wikipedia [5]


There has been a number of pandemics in human history, generally zoonoses all that have come with the domestication of animals - such as smallpox, diphtheria, influenza and tuberculosis. There have been a number of particularly significant epidemics that deserve mention above the "mere" destruction of cities:

1. Plague of Athens during the Peloponnesian War, 430. C. An unknown agent tifoidea2 possibly fever killed a quarter of the Athenian troops and a quarter of the population over four years. This fatally weakened the dominance of Athens, but the absolute virulence of the disease prevented further expansion.

2. Antonine Plague, 165-180. Possibly smallpox brought the Middle East; killed a quarter of those infected and up to five million total. At the busiest time of a second outbreak (251-266) said that 5,000 people a day died in Rome.

3. Plague of Justinian, began in 541. It is the first recorded outbreak of the bubonic plague. It started in Egypt and reached Constantinople the following spring, killing (according to the Byzantine chronicler Procopius) 10,000 a day at its busiest and perhaps 40% of the inhabitants of the city. He went on to destroy up to a quarter of the inhabitants of the eastern Mediterranean.

4. The Black Death began in the fourteenth century. Eight hundred years after the last outbreak, the bubonic plague returned to Europe. Starting in Asia, the disease reached Mediterranean and western Europe in 1348 (possibly led by Italian merchants fleeing the war in the Crimea), and killed twenty million Europeans in six years, a quarter of the total population and to the half in urban areas most affected.

a. First pandemic (1816-1826). Previously restricted to the Indian subcontinent, the pandemic began in Bengal and spread across India by 1820. It spread to China and the Caspian Sea before declining.

d. The fourth pandemic (1863-1875) spread mostly in Europe and Africa.
e. The fifth pandemic (1899-1923) had little effect in Europe because of advances in public health, but Russia was badly affected again.

6. The "Spanish flu" (1918-1919). Began in March 1918 at Fort Riley, Kansas, United States. A severe and deadly strain of flu spread around the world. The disease killed 25 million people in the course of six months, some estimate the total worldwide deaths more than double that number. About 17 million are estimated to have died in India, 500,000 in the U.S. and 200,000 in England. It vanished in 18 months and was the H1N1 strain specific.

10. HIV is the disease that involves the immune system's inability to deal with infections and other pathological processes, is considered pandemic due to its rapid spread, its victims are estimated between 20 and 25 million, primarily in Africa.

11. The typhus epidemic disease is wartime, and has sometimes been called "camp fever" because of its pattern of bursting in times of hardship. Emerging during the Crusades, had its first impact in Europe in 1489, in Spain. During the struggle between the Spanish Christians and Muslims in Granada, the Spanish lost 3,000 troops for war casualties and 20,000 by typhus. In 1528 the French lost 18,000 troops of his troops in Italy and lost supremacy in Italy for the Spanish. In 1542, 30,000 people died of typhus while fighting the Ottomans in the Balkans. The disease also played a major role in the destruction of Napoleon's Grande Armée in Russia in 1811.

12. Other epidemics occurred in encounters between European explorers and populations around the world, frequently occurring local epidemics of extraordinary virulence. The disease killed much of the native population (Guanche) Canary Islands in the sixteenth century. Half the native population of the island the Spanish in 1518 died of smallpox. Smallpox also destroyed Mexico in the 1520s, killing 150,000 in Tenochtitlan alone, including the emperor, and Peru in the 1530s, helping the Spanish conquerors. Measles killed a further two million Mexican natives in the 1600s. Even in 1848-49, as many as 40,000 to 150,000 Native Hawaiians are estimated to have died of measles, whooping cough and influenza.

15. Influenza A (H1N1), also known as swine flu (2009-2010) is an infectious disease caused by a virus belonging to the family Orthomyxoviridae, that is endemic in pig populations. These viral strains, known as swine flu virus, or SIV (for the acronym of "Swine Influenza Viruses") have been classified into Influenzavirus C or any of the subtypes of the genus Influenza virus A, with known H1N1 strains, H3N2, H3N3. On June 11 the World Health Organization (WHO) classified as alert level six, ie, it is now a pandemic. The fatality rate of the disease was initially high, has become low to start antiviral treatment that is sensitive.

16. There are also a number of unknown diseases that were extremely serious but have now vanished, so that its etiology can not be established. Examples include fever Greece aforementioned 430. C. Sweat and English sixteenth-century England, who glared at people in an instant and it was much more feared than the bubonic plague.

A striking detail, looking at the chronology of pandemics, we note that in ancient times gave very sporadically and then began to shop more often:

(1) Plague of Athens during the Peloponnesian War, 430. C. 595 years later it appears as follows: (2) Antonine Plague, 165-180. The third comes 361 years later (3) Plague of Justinian, began in 541. The next is unleashed in 1348 after 541 years in Asia (4) the bubonic plague began in Asia and then reached the Mediterranean and Western Europe. In the sixteenth century (352 years later) re-sprout (5) the bubonic plague in Europe. In the nineteenth century there were five pandemics. In the twentieth century another five pandemics and in these early years of the century and we had four. Pandemics are triggered increasingly followed, taking thousands of lives each.
On August 7, 2013 in the newspaper El Pais in Spain was published a notice [6] alarming

The main influenza experts consider necessary to avian H7N9 virus with the same as Ron Fouchier, of the Erasmus center in Rotterdam, and Yoshihiro Kawaoka of the University of Wisconsin, did last year with the H5N1 avian virus also with enormous scandal public opinion and recommendations of censorship of biological security advisers in the White House. It is generated on the H7N9 virus mutations that become pandemic agent, instead of waiting for nature to do on your own and organize a pandemic alone. The U.S. health authorities imposed a strict security conditions of these experiments, as part financed.

There is a group of crazy extremists, but scientists working at the highest levels of international health, subsidized by their respective governments rather by the same people that will then be at serious risk of dying of these experiments.

For nation shall rise against nation, and kingdom against kingdom: and there shall be famines, and pestilences, and earthquakes in various places. Matthew 24.7 RV60