NEWS. With money in the fingertips. In a step of 666. By Fabian Massa 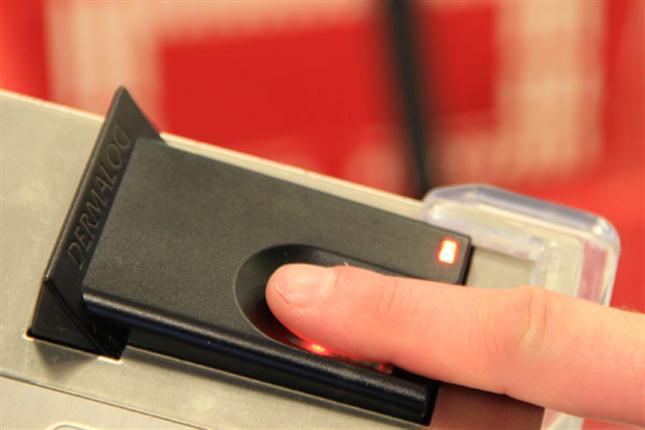 To speed up the ranks of the grocery store checkout, a German company installed an electronic payment system based on customer identification by fingerprint associated with a bank account [1]

While the news is from 2010, it is interesting to see how they are making attempts to insert 666 within the system and that looks totally innocent.

BERLIN (DPA). - Anyone who knows buying daily stress levels that can be generated in the row that is formed before the box in the supermarket when a customer needs extra time to pay and no cash, can not find your card or no change.
In Germany, this problem is accentuated because besides row always be the case, customers usually have to take care of themselves pocketing what they buy.
Some supermarkets are experiencing a solution to this problem, consisting of a payment system based on the identification of customers through electronic fingerprint.
Customers must register at the end of the supermarket, for which they must support one finger from each hand on a scanner and register your address and bank account number, so that the system can deduct the amount hereinafter for each purchase .
The pilot project was launched in some branches of the Rewe chain of Cologne, and is expected to soon spread to the rest of the country. The biometric payment method for affiliates, as it is called, has the advantage of being "at hand," says the cashier Helga Gerth.
"Money can forget, the card lost, but it's hard for someone to come without a finger," he adds. Customers of all ages accept the method and, as the commissioner of the Office for the Protection of Data of North Rhine-Westphalia, are the guinea pigs for a system that will eventually cover the whole of Germany.
"Some Edeka chain markets also use the method in the south of the country", says Ulrich Binneboessel, the association of German retailers. The wholesaler Metro also is testing near Düsseldorf, where vegetable shop Future Store, part of the chain of greengrocers Real.
The company Dermalog Hamburg, specializing in biometrics, made available the necessary technology to Rewe chain and plans to introduce the system in the CeBIT technology trade fair, which will be in March.

The representative of the German supermarket chain Rewe, which adopted the system on a trial, says it is a pay insurance Photo above: Dermalog

"We want to test the effectiveness of the technology for everyday use and its acceptance among the customers," said Rewe spokesman Andreas Kraemer. Since only certain features of the fingerprint is recorded and converts them into a numerical code, fingerprint can not be reconstructed entirely from the record, he said.

"The process is safe," says Kraemer. "The scanner can recognize whether a finger is real or not, because it proves the circulation of blood in the finger. Can not use a fake finger and come with a fingerprint lifted with tape in James Bond plan," adds .
However, members of the Chaos Computer Club, the largest association of European hackers, recently mocked device safety. They took a fingerprint from a glass that had held a client and copied. After the copy could use to fool the scanner.
However, the retail association believes that the technology is safe. "It is a system with high safety standards. Never will, on the other hand, a system that is 100 by 100 insurance," says Binneboessel, adding that the bank PIN and cards are safer than the fingerprint system.

It is the time factor, and with him the job, ie, what drives costs to implement the system. "On average, pay with fingerprint takes less than seven seconds, requiring PIN card takes about 12 seconds, and with cash, a 20" Kreamer said.
Since it was launched, about 300 people involved in the pilot project, and since most people prefer to pay by fingerprint.
One user, a man of 28 years, said the system is "super" and does not see a problem. But the bride does not like: "If you do not know what the system and who has access to my data, I do not like it," she said.

The system is still a pilot and is no longer safe. I think this is one step closer to the microchip implant, which will be absolutely safe, comfortable, fast, effective and end time stamp.

Week 70 is about to begin, only Jesus saves.