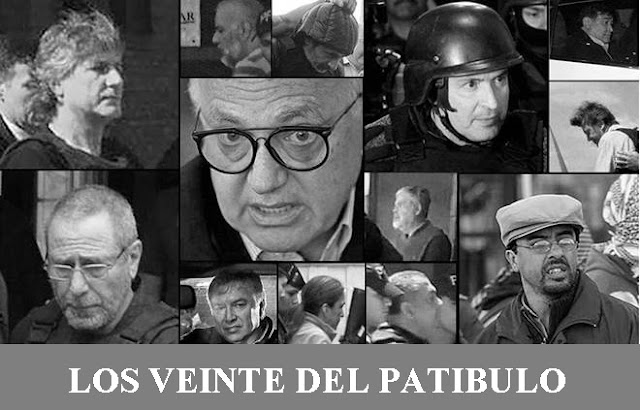 The main cultores of the NAC & POP, (for the readers of outside Argentina: National & Popular), the Populist policy par excellence, with an appearance of Left, that said to defend the "Most Poor" (while they robbed the money of the orphans, the old, the sick and the retired), and that they had a criminal purpose: "We go for Everything", that is to say "we are going to steal everything that is worth something"; destroying in the process the Institutions, like the Armed and Security Forces, leaving the Nation without internal or external defense. Destroying historical values ​​such as respect for the Law, norms, work and effort.

The result can be seen in its maximum expression in the Province of Santa Cruz, where Mrs. Alicia Kirchner still governs: A state where 50% of the population is a public employee, where there is no work, no health, no security, no education, nor future, nor can pay the salaries of such "Apparatus of Government" a "White Elephant" that is surviving only by the collaboration of the National State, which can not find a way to solve the complex situation of the Province, for the simple reason that is irresoluble.

The weighted "Decade Won" of the "Official Account of Kirchnerism" has left its most vile damage in a large part of society, the poorest not only economic, social, cultural and opportunity but also poor for their inability to differentiate the " Story "of the" Reality ": Not being able to distinguish the Truth from the Poserdad, they are trapped in an Ideological Falsehood and they keep clinging to what defenestró of their potentialities and condemn them to be a" Lost Generation ", left in their way to think in the middle of the 20th Century, in front of a World that already entered the 4th Industrial Revolution.

In the note of the newspaper La Nación * The 20 referents of Kirchnerism who are detained [1] published on 12/07/2017 can be seen a summary of each of the causes, which reflect as a whole, the Matrix of Corruption (a Illicit Association) armed at the time by the late Néstor Kirchner and then led by the current Senator Cristina Fernández de Kirchner who wanted to perpetuate himself in power to plunder the country "Eternally".

In Argentina we had, thank God! another luck and the dismal plans were disrupted. The same can not be said of Venezuela, where the "Maduro Socialist Revolution" is killing people from hunger and leading that nation to a ruin from which it can hardly escape.

The movement "NAC & POP" was characterized by lies, deception, theft, fraud, dilution of justice, the attack on internal and external security, having favored the growth of Organized Crime, having liberated the Country for drug trafficking, the decline in health, justice, education, opportunities, culture, etc ... All characteristics that speak of the establishment of the Empire of Evil in the Country and the weirdest thing is that many of those who say "Christians" they can not see this and defend these "Spawn of Satan" clearly manifesting their spiritual myopia, reflected in their inability to read reality correctly.

Week 70 is about to begin. Wake up and understand that your inability to "read material reality" is the product of not being able to read the spiritual reality enclosed in Scripture.