THE JUDGMENT AND THE DECLARATION FOR THE MORNING. SANTIAGO 4.11-17. BY FABIAN MASSA. 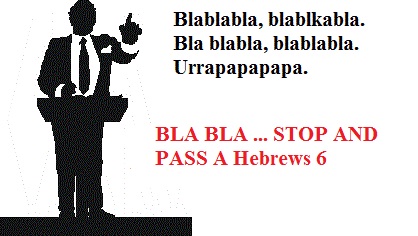 to. Judging Brother
b. Talking boastfully about the future.

11 Brethren, do not murmur one another. He who murmurs of the brother and judges his brother, murmurs of the Law and judges the Law; but if you judge the Law, you are not a doer of the Law, but a judge. 12 Only one is the giver of the Law, who can save and condemn; but you, who are you that you judge another?
It is clear that the brother should not be judged (for condemning), since that is a matter of the Lord. However, most confuse this with not judging, criticizing or denouncing a certain wrong situation, which is what Santiago does next.


b. Talking boastfully about the future.

13 Let us go now, who say, Today and tomorrow we will go to such a city, we will be there a year, we will negotiate and we will win, 14 when you do not know what will be tomorrow. For what is your life? Surely it is a haze that appears for a little while and then fades away.15 Instead you should say, "If the Lord wills, we will live and do this or that." 16 But now you boast in your pride. All such boasting is bad. 17 He who does good and does not sin commits sin.

We see clearly that Santiago criticizes the attitude of those who declare something by taking it for granted: "Today and tomorrow we will go to such a city, we will be there one year, we will negotiate and we will win", 14 when you do not know what will be tomorrow. It is clear that Santiago is criticizing the situation and not someone in particular, since he speaks generically by saying "Let's go now !, those who say this or that thing" and instead proposes a "Christian correct" format to focus life: "Instead of this you should say," If the Lord wills, we will live and do this or that. "About those who act in this way says James: They are acting with pride, all such boasting is bad which constitutes a criticism to the attitude of these people (vv16) and explains that doing wrong knowing good is sin (vv17), ergo is calling them sinners, without identifying anyone, Santiago speaks only of the situation.

And this is what is confused these days, most reject any criticism of attitudes or situations, because they have not understood the difference between the commandment not to condemn the person and to condemn the bad thing that person does. My estimations, when someone sees something that is wrong and does not denounce it, does not make it visible to others, is sinning by concealment; in the same way that he who sees the one who does the bad and supports it, encourages or benefits from that which is wrong, is complicit or at least necessary participant.

Going back to the last verses of this chapter, it is superb to declare about the future, simply because one does not know if he will live the next day. What can we say then about prosperity preachers, those who stand the pulpit and declare or decree that the best is yet to come? Do they know if those who are taking that word will be alive the next day? Is the preacher certain if he himself is alive the next day?

It is only to think that both the "Anointed Declarants" who distribute blessings and 4x4 trucks as if they were sweet, as those who buy all those Decrees of Power have never read in detail Santiago 4.13-17.

Awake you who slept and also you who sleep in vain dreams of prosperity. Week 70 is on the doorstep.

THE JUDGMENT AND THE DECLARATION FOR THE MORNING. SANTIAGO 4.11-17. BY FABIAN MASSA.
JUDGE, DECLARE, DECREASE, CRITICAL.