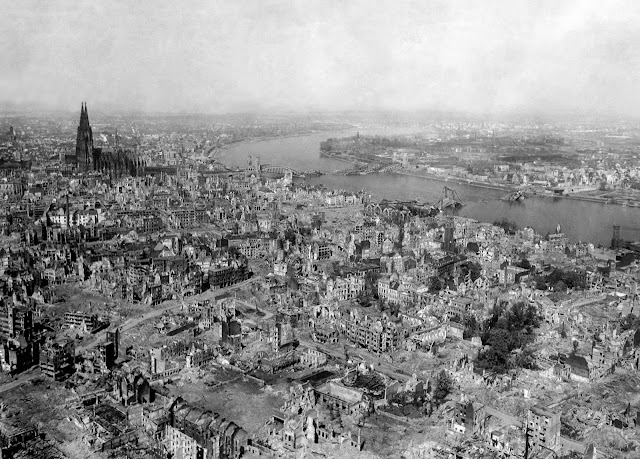 Faced with the drama of a destroyed Germany, razed, the spokesmen of the German people and other European peoples, affirm that the Germans in their great majority approved the aberrant policies of the Nazi regime.

For the Russians and adherents of the "Free Germany" of General Seydlitz [2], the German people were the first victims of Hitlerian madness.


A third, and most logical, position is that within the village there were both those who supported Nazism and others who did not.
For the Confessing Church, the fall of Hitler is exemplified in the Scripture where he says: "How art thou fallen from heaven, Lucifer the son of the Dawn? You have said in your heart, "I will ascend to heaven above the stars of God, I will raise my throne, and will sit on the mount of Réunion in the far north." I will ascend to the heights of the overcast, I will resemble To the Most High. "15" Behold, to the hedge thou hast been hastened down into the bottom of the pit. "Isaiah 14 - Catholic Bible Online [3].

Exclaims Barth: "What matters ultimately is not a settlement of accounts or reciprocal and contradictory self-justifications; The essential thing is, in 1945, that together we begin to build a world to the stature of man, at the same time open to charity, justice and progress. Everything that can close the way to this future, valid only, must be put aside; To reject the vengeful works; The search for what he truly builds is the common task to which all men of goodwill, whether Christians or not, are invited "

While the Allies ignored Barth's message and used Germany for their geopolitical purposes (and although they rebuilt it - Marshall Plan by - it was to serve their own interests and not those of the humiliated and desolate German people) Confessing Church received the words of Barth well, and under the direction of Niemöller (who had spent 8 years locked up in a concentration camp) wrote a statement where they assume their guilt, a clear sign of their healing process.
In 1945 Barth returned to Germany, and in 1946/47 offered him to teach in Bonn theology the young pastors of the postwar period.

Faced with the spectacular reconstruction of West Germany, the part under the old USSR and the German Communists was backward and the Church often persecuted by the KGB, Barth also condemned the abuses of Russian Communism, although not with the same force with Which opposed Nazism.
Together with Niemöller Barth he asks Christians living in East Germany to continue to believe in God in spite of everything.

In 1960, at a conference given in Chicago, Barth says "... As far as this (Cold War) issue is concerned I can not agree with most of the people around me. I do not prefer Eastern Communism when I realize how the World presents itself. Surely I prefer not to live in the World of Communism and I do not want another to be forced to live in it. "[This is perhaps one of the reasons why Barth was the" Alma Mater "of Christian and evangelical Christian theologians Of Latin America when "Liberation Theology" emerged as a proposal to the people to the detriment of the '60s Cuban Revolution', which was intended to be spread in Latin America as the 'Universal Panacea to be free from capitalist oppression'. Comment of Fabian Massa, outside the text of Casalis]

Barth firmly believed that Christians can and should assume political responsibilities of government. When a Christian loses the opportunity to do politics, he is leaving it to someone who will not have as principles those that Christ teaches.

Barth and humanism in the Church: "... Evangelical theology had declined in religion, becoming anthropocentric and in this sense, humanist ... when the centrality of theology must be the Godhead of God (and not of man)." What would Barth say about "theology, which is clearly humanist and permeated by the postmodernity of most of today's" Evangelical Churches "?

Barth and music: Mozart's great admirer and wrote several studies on the master of Salzburg, he has even been recognized within the musical scholarly environment by them.

[1] BIOGRAPHY KARL BARTH - Georges Casalis, The Meaning of a Life. Part 1, pages 17-47. Http://www.tesorosdesabiduria.com/2017/06/karl-barth-noticia-biografica-by-fabian.html
[2] Walther von Seydlitz-Kurzbach was a German artillery general during World War II. He gained fame when, after being taken prisoner by the Soviets at the Battle of Stalingrad in January 1943, he openly incited an anti-Nazi uprising among the Wehrmacht officers to lead to the overthrow of Hitler to prevent the total collapse of the Reich to which he was Directing Your request was not heard.
[3] http://www.bibliacatolica.com.br/la-biblia-de-jerusalen/isaias/14/