THE "OLD BELIEVERS" AND THE CURRENT ROMAN EMPIRE OF THE EAST. BY FABIAN MASSA. 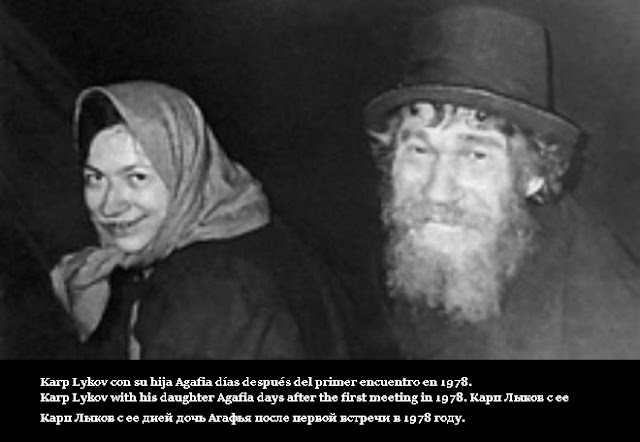 THE "OLD BELIEVERS" AND THE CURRENT ROMAN EMPIRE OF THE EAST. BY FABIAN MASSA.

On 21 January 2017 a news item was published on the BBC [1] about the Russian Lykov family, which lived isolated in the region of South Siberia from Siberia for 42 years, to avoid being executed by the communist regime.


The "old believers [2]" (in Russian: староверы) or raskólniki (from raskol or schism, in Russian: раскол), in Russian historiography, were Christians in favor of the old liturgy (a strict morality, Without alcohol) and ecclesiastical canons that did not accept the reform of Nikon in 1654, date from which they were cruelly persecuted and decimated by the Zars. After the Russian Revolution of 1917, they were also persecuted by the communist regime that prevailed in the old U.R.S.S.

The Nikon Reformation [3] was, in Russia, the new edition of books of canons and liturgical ordered in 1654 by Patriarch Nikon in order to bring the Russian Orthodox Church to the Greek Orthodox Church, emphasizing the interventionist role of the state in Ecclesiastical affairs. Pierre Pascal, historian of the origins of the Raskol (Russian schism), locates its origin in the sixteenth century, affirming that the origin of the same is pure and deeply religious ", although it is clear that the political factor was decisive.

This is how Moscow in the mentality of the people and of the lower clergy, progressively imposed the idea of ​​Russia as the "Third Rome." Thus the princes of Muscovy obtained the title of "Czar", Slavic variant of Caesar, thus taking the legacy of the Ancient Roman Empire of the East.

The idea of ​​a "Third Rome" was never formally accepted by the Orthodox Church, there was a Schism and a confrontation to death from which the supporters of the Russian Orthodox Church came out victorious.

The conclusion is then that, politically, the Tsarist regime is a continuation of the Eastern Roman Empire. It was then replaced by the old U.R.S.S. And after 1991, by the current Russian Federation, currently led by Vladimir Putin.

While the Patriarchate of the Russian Church [4] is subordinate to the Orthodox Communion, heiress of the ancient Roman Catholic Church of the Eastern Roman Empire.

Shreds of history that remind us that the 4th Beast upon which Daniel 2: 40-45 prophesied is still alive.

Jesus said, "He that read Daniel, understand," referring to the disciples should understand the prophecy (Although in that passage - Matthew 24.15 - specifically refers to the prophecy of the Seventy Weeks, but obviously the slogan must be taken to All prophetic texts, which is where the "Signs of the End Times" are prophesied). And the fulfillment of the prophecy is History.

Week 70 is about to begin, every so often newspapers appear in the newspapers that remind us of the disciples that we must be attentive to history and prophecy.