Note. Nabucco, Mao and the golden statues. By Fabian Massa 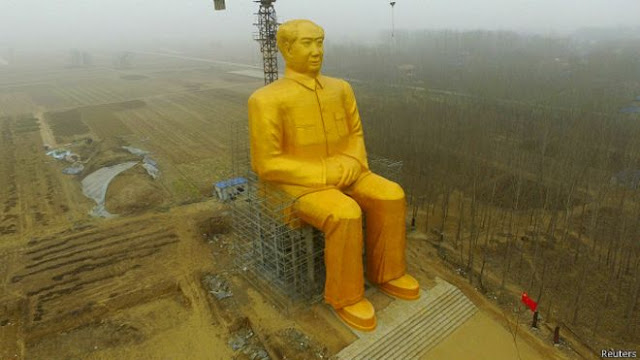 Note. Nabucco, Mao and the golden statues. By Fabian Massa 2016

1. A giant Mao and gold hovers in the Chinese fields

Mao sitting almost 37 meters and painted in gold, is the new giant statue of Chinese leader, in a rural village in China. Painted gold to simulate a resplendent golden sculpture giant sitting blankly lies in rural Tongxu fields in the province of Henan, in central China.
This province was the epicenter of a famine in the 50s, a result of Mao's policies, and that killed millions of people.
http://www.clarin.com/mundo/Mao-gigante-dorado-campos-chinos_0_1498650344.html

3 King Nebuchadnezzar made a golden statue measuring twenty-seven meters high and two meters wide through [a] and raised on the plain of Dura, in the province of Babylon. He sent two messages to senior officials, authorities, governors, advisers, treasurers, judges, magistrates and all the provincial officials to come to the dedication of the statue once stood. 3 Therefore all these authorities [b] came and stood before the statue which King Nebuchadnezzar had set up.
Daniel 3.1-3 NTV.

The Semana70 is about to begin. We are ready?