JACKIE KENNEDY - MELANIA TRUMP: MUCH MORE THAN A CELESTIAL DRESS. BY FABIAN MASSA. 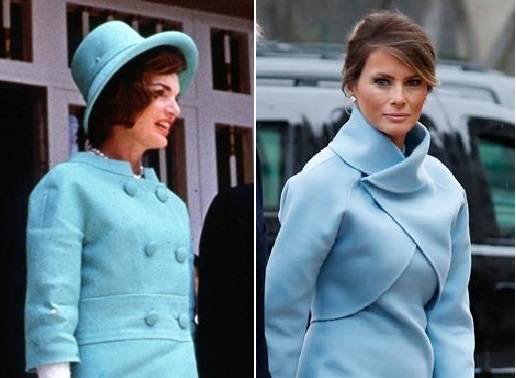 JACKIE KENNEDY - MELANIA TRUMP: MUCH MORE THAN A CELESTIAL DRESS. BY FABIAN MASSA.

Melania Trump's dress for the assumption of her husband as President of the USA. (Designed by Ralph Lauren [1]) has an "air" similar to that used by Jackie Kennedy on the occasion of the ascension of J.F. Kennedy in 1961.

The "reading" of Melania's dress goes far beyond fashion:


1. Kennedy's first economic proposals were aimed at counteracting the effects of the economic recession for which it was necessary to increase public spending. Other measures were taken to help economically depressed regions and to raise the minimum wage of workers employed in interstate commerce. However, much of its national policy agenda was rejected by Congress. Donald Trump hopes to counter the fall of American employment by defending the American industry, increasing public work and tightening immigration measures.

2. JFK's internal policy was highly Keinesian [2]: The public finances financing education, health, the 3rd Age, local Industry, ie what was known during the 1950s and 1960s as Progressive, And the welfare state. Donald Trump's policy will follow exactly the same steps, moving away from the Chicago Boys' Free Market Theory. That is why it is called populist, although the term should not be read or interpreted in the same way as the "Latin American Populists".

3. In South America Kennedy worked to reverse Truman and Eisenhower's policy of military rather than economic aid. It started the Alliance for Progress, a program that provided $ 20 billion to South American countries to modernize their economies. The Peace Corps, created on September 22, 1961, was another attempt to improve the image of the United States in South America and other regions of the world [3]. The purpose of the Alliance for Progress was to curb the advance of Marxist philosophies imported from Cuba, producing improvements in the quality of life of the inhabitants of Latin America in order not to turn to communism. Needless to say, the companies that would be responsible for producing labor in Latin America were all American companies, which, while they were generating jobs, also took profits from their country and left contaminated soils, rivers and seas in Latin American countries (Current case of Barrick Gold in San Juan - Argentina). I doubt that Donald wants to invest U $ D 1.00 in Latin America, at this point I think he will prefer that all investments be made in North American soil.

The choice of clothing and photos of this type of event has a political reading, a historical reference and also a pending reading for Latin American theologians. 9 History only repeats itself; Everything was done before. There is nothing really new under the sun. Ecclesiastes 1,9 NTV.

Week 70 is about to begin. Every act of International politics brings us closer to the End Times.