Reflection. Crowds from the point of view of the super-today and Jesus. By Fabian Massa. 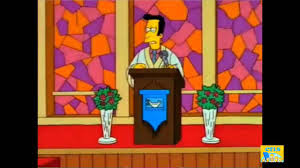 The crowds are weak and the desire of many, such as musicians, politicians, lecturers, religious, athletes, businessmen, merchants, advertisers, etc ... The reason is obvious, the crowds following someone able to represent that "someone", and that power is manifested in various forms, money, status, political power, glory, fame, pleasure, egotism, etc, etc, etc. For all of them represent the crowds followers (read money).

The Apostles, Anointed, Super Pastors today also love the crowds, enjoy to the utmost of his "Mass Baths". While politicians measured in the mass percentage of acceptance or "Intent to vote"; the "Apostles" measure their degree of "Anointing", after all, for most of them also "Multitudes = Money".

Then pass the videos of their wonderful "Cult of Power and Anointing" in their congregations, to his flock the praise and fantasize as they say, between breath and sighed: "Ohhhh, how much anointing".


In the Bible the word crowds appears 75 times in the NT:


When we study the Bible, we see that Jesus' attitude toward the crowds:

And it is also clear that the miracles were "signs" as says the Apostle John in his Gospel that marked Jesus' deity. Ie the purpose of the signs was to believe in Him (John 4.48) became.

Jesus preached to the crowd in parables, 12 that '' much to see and not perceive; and hearing they may hear and not understand;
lest they turn and be forgiven. "(Mark 4.12 NIV)

In contrast to his disciples he taught them. Jesus struck up was related to everyone, but privacy was alone with his disciples, whom he considered his friends because he had taught them all about the Kingdom (John 15.15).
But now we see this contrast:

1. Jesus attracted crowds to turn called disciples.
2. Super-Apostles of today seek the crowds and do not prepare disciples, they just want to have a megachurch, "gather people" because it represents "Anointing, Power, Please God (read" Tithe ") that the" Anointed One "leverage to:

to. Live like a prince, going on vacation in exclusive locations.
b. Travel "Around the World", but in reality only the 1st World: Europe, USA, Israel, never places like Biafra, Ethiopia, Sudan, Haiti, and poor places.
c. Educate their children in exclusive universities such as Oral Roberts.
d. Keep your whole family living in the congregation
e. Putting business and finance them with money from United.
f. Wearing costumes U $ S 5,000 to give a "Cult of Power": two hours of "Christian songs" without content + 30 minutes + Power Statements five minutes to preach three verses and two matches.

It's time to wake up, you are sure to be dazzled by the lights of the show and silly songs. Salvation is in Jesus and His Word. Stop being part of a crowd to become a disciple of Christ. Look for a church where they teach you to eat the Bread of Life.

Week 70 is about to begin, are we ready?