Reflection. Jesus, his disciples and the Rule of Pareto. By Fabian Massa. 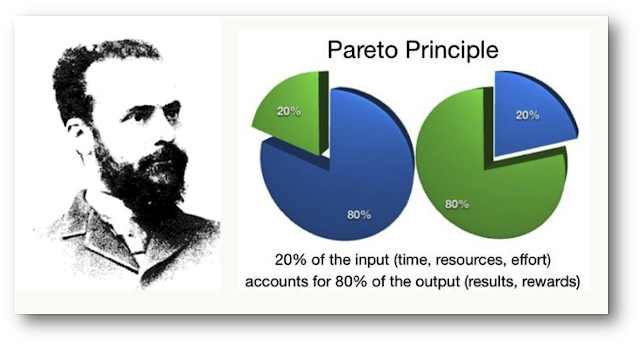 Treasures of wisdom shared with us: "Jesus, his disciples and Pareto Rule"

Vilfredo Federico Damaso Pareto (1848 - 1923) was a sociologist, economist and Italian philosopher. Studying the society of their country enunciated the principle based on the so-called empirical knowledge. He studied people in their society is naturally divided between the "few of much" and "many little"; Two groups of 80-20 and established proportions such that the minority group, comprising 20% ​​of the population, held 80% of something and the largest group, comprising 80% of population, 20% of the same thing .


The Pareto principle applies today to the most diverse activities, such as politics and economics. It also applies to the principles of marketing and quality control of various industries.

The 80-20 ratio is arbitrary; It is not accurate and can vary. Its application is approximate and adaptable to each particular case.

A. Jesus and the Pareto rule.

In Luke 9 the Bible tells us that Jesus sent his twelve disciples to preach the gospel. And in chapter 10 says that after the Lord appointed seventy others, and sent them two by two ahead of him to every town and place where he himself would come (Luke 10.1 RV60). The truth is that his disciples were only twelve at last.
If we all, we have 12 it is the 17.43% 70.
Other account more: Jesus's inner circle was composed of John, Peter and James, three of twelve which put in numbers is: 25% 3 = 12.

We see that the Pareto Principle also occurs in these numerical relationships.

B. The Principle in the Church

The Pareto Principle also true in the Church, like any other organization, there own activities in the least (about 20%) work for the most part (approximately 80%), which is logical and functional .

In the parable of the sower, we can see the Pareto Principle, as only a part of the seed fell on good ground. Consider this not be discouraged if only part of the people to whom we teach or preach then really bear fruit.