Reflection. The war is not against us but against Christ. Genocide Armenian, Greek and Assyrian. By Fabian Massa. 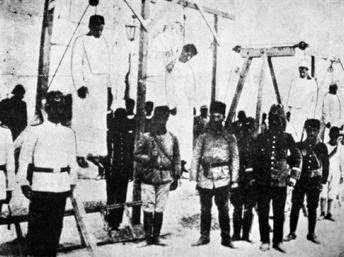 9 "Then deliver you up to tribulation and kill them, and hated by all nations because of my name. 10 At that time many will turn away from the faith; betray one another and hate one another; 11 and emerge many false prophets will appear and deceive many. 12 There will be wickedness, the love of many will grow cold, 13 but he who stands firm to the end will be saved. 14 And this gospel of the kingdom shall be preached in all the world for a witness unto all nations; and then shall the end come. NIV Matthew 24.9-14.

9 "Then deliver you up to tribulation and kill them, and hated by all nations because of my name.

On 24 April 2015 the Centennial of the Armenian Genocide of 1915 was fulfilled, the same was carried out by Turkey under the government of the Young Turks. But was not the only massacre, although the most studied and known, the Young Turks massacred also the Pontic Greeks and Assyrians.

What they had in common these three ethnic groups? Simply they were all Christians. In all the martyrs at the hands of Satan (who used the despotic Islamic government of Turkey between 1915 and 1920) amounted to over 3,000,000 people.

The Greek genocide (also called Genocide of the Pontic [1] Greek) is a controversial term used to refer to events which pontics before and during World War Greeks were faced.
These terms are used to refer to persecution, massacres, deportations and death marches [2] of the Greek populations in the historical region of Pontos, provinces southeast of the Black Sea in the Ottoman Empire during the early twentieth century by the administration of the Young Turks. It has been argued that the killings continued during the Turkish National Movement led by Mustafa Kemal Atatürk who had organized the fight against the Greek invasion of western Anatolia.
According to various sources, the official death toll Greeks in Anatolia was 300,000 to 360,000 men, women and children. Turkey has denied the Greek genocide, as well as the historical veracity of contemporary Armenian and Assyrian genocides.
http://es.wikipedia.org/wiki/Genocidio_griego

The Assyrian genocide refers to the mass murder of the Assyrian population (known as Syriac Christians, Suroye / Suryoye) of the Ottoman Empire during the 1890s, World War I and the period of 1922-1925. The Assyrian population of Upper Mesopotamia (the regions of Tur Abdin, Hakkari, Van, Siirt current southeastern Turkey and the region of Urmia in northwestern Iran) were forcibly relocated and massacred by Ottoman forces and Kurdish paramilitaries between 1914 and 1920. Estimates of the magnitude of the slaughter Los vary. Contemporary reports put the number at 250,000, a number that is accepted by various scholars and journalists. Some sources claim that the figures reach 750,000. In this persecution perished two thirds of the entire population. This led to a re-establishment of large-scale Assyrian people in countries like Syria, Iran and Iraq (where they suffered violent attacks by Arabs) and other neighboring countries and throughout the Middle East, such as Armenia Georgia and Russia.
Currently suffer fierce persecution at the hands of bloodthirsty terrorists calling itself "Islamic state" and are being wiped out entire communities in Iraq and Syria. News like this "The EI kidnaps at least 56 Assyrian civilians in northeastern Syria" are common in recent years. There are an ethnic and religious cleansing and the UN and NATO do nothing to stop it.
The Assyrian genocide took place in the same context as the Armenian and Greek genocides. At these events, nearly three million Christians of Greek Syriac name, Armenian Orthodox or were killed by the regime of the Young Turks.
http://es.wikipedia.org/wiki/Genocidio_asirio

The Armenian genocide, also called Armenian holocaust or Մեծ Եղեռն (Mec Yełeṙn, "Great Crime"), was the forced deportation and extermination of an unknown number of Armenian civilians, calculated approximately a million and a half to two million people, by the Young Turk government of the Ottoman Empire from 1915-1923.
By order of the central government, the deportation of the entire Armenian population, unable to load the means of subsistence, and his forced march stipulated by hundreds of kilometers through desert areas, where most of the deported perished victim hunger, thirst and deprivation, while survivors were robbed and raped by guards who were protecting them, often in combination with bands of murderers and bandits. http://es.wikipedia.org/wiki/Genocidio_armenio

12 There will be wickedness, the love of many will grow cold [3],

Many think that the opposite of love is hate, but really is indifference, and unfortunately today the Church (at least the Pentecostal Argentina, where I was born and where I congregate) is a monument to indifference to pain, to the point that despite the disasters [4] and the massacres of Christians in the Middle East, have not heard a single corporate prayer in any of the cults that have attended since 1999 to date. For many pastors who have been persecuted and killed are "Catholic, Orthodox or non-evangelical" removing the sight of what really matters: that preferred to be beheaded for apostasy, does you can ask for better proof of his "commitment to Christ" ?

14 And this gospel of the kingdom shall be preached in all the world for a witness unto all nations; and then shall the end come.

But clearly it is not predicated of this, nothing is said of the apocalyptic texts. The news is preached: Repent, for the kingdom is between us and the End Times approaches. He that believeth shall be saved and not shall be damned. However no one speaks of repentance and less than Fin.


[1] Christian confession at that time. One part is located in Turkey after converting to Islam. An important part settled in northern Greece and one in Ukraine.
[2] The death marches are forced marches of prisoners of war or other prisoners or persons deported. Those who are forced to march must walk long distances for a period of extremely long time and are not providing food or water, or considered this "inadequate" provision. The prisoners that collapse are left to their fate or executed by guards.
[3] http://www.lasemana70.com/2015/04/reflexion-el-sectarismo-endurece-el.html http://www.lasemana70.com/2015/04/reflection-sectarianism-hardens-heart. html
[4] http://www.tesorosdesabiduria.com/2015/01/reflexion-ricardo-ruben-y-su-iglesia.html http://www.tesorosdesabiduria.com/2015/01/reflection-richard-ruben- and-his.html