Reflection. The Super Apostles and shoes Pope. By Fabian Massa. 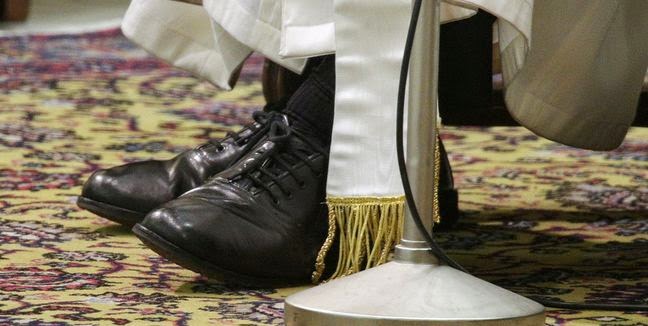 Humility is a quality or human characteristic that is attributed to all persons a small and insignificant compared to the transcendent being or existence of God is considered as if spoken in theological terms. A humble person usually has to be modest and unpretentious life: someone who thinks he or she is better or more important than others. The concept of humility in various denominations is often much more accurate and extensive. Humility should not be confused with humiliation, which is the act of doing or experiencing some other self a shaming feeling, and that is something completely different. For Christianity most humble person was Jesus being the richest of all became poor and was born in a manger and still the most important died on a cross [1].

Every Christian Minister has (or would) you have Christ as a model, since his life was preaching simplicity [2]: Not searched his, not sold his wisdom or his miracles. No flaunted his anointing, not campaigned in Miracles. He made a show of power or wealth, or anything. He did not seek to preach to obtain a benefit or recognition.

He did not choose his audience, not intended biggest stages. They followed the crowds but not used them.

Always seek the Truth taught in the Word, not speaking of great material benefits but Salvation.

What a contrast this with the Prosperity Gospel of super ministers !!, the Apostles and the Anointed, organized campaigns tremendous miracles where tsunamis promise of blessings to those who come into El Camino. The central message of his preaching is: "Come to find his miracle" and the word catchphrase is "Receive" repeated ad nauseam.

They come dressed like princes, wealth and ostentation are a "reflection" of their blessedness. Its economic financial prosperity is a "consequence of his anointing".

However none of these Super-Apostles has such a big nor as rich as I Ministry Francisco, with its shoes gives an example of humility to the "Anointed".

Humility is also learning from those with whom we do not agree. Week 70 is about to begin, are we ready ?