Reflection. Cain's sin and ruin of Nations. By Fabian Massa. 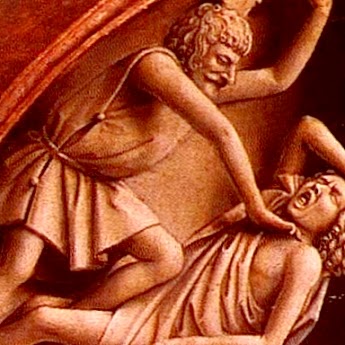 The first sin of mankind was Adam and Eve (disobedience) a transgression against God, its consequences were very serious [1]:

· They were cast out of Eden, which meant losing to eat of the Tree of Life.
· As a result of the above, it appeared the Kingdom of Death
· Appear pests and diseases
· Surge forced to sustain job: "You shall eat bread by the sweat of your brow"
· The pains of childbirth for women.

Cain killed his brother Abel, perverting God's law, which clearly says: "Thou shalt not kill" (Ex 20.13.) Each time a man commits murder, is recreating the sin of Cain. This second sin of mankind was the transgression against others, started as zeal, envy, hatred, and finally murder.
Violate the rights of others results in:


The scholar Félix García López says: Curse - Cain's punishment is much harsher than that of Adam; although this fatigue and sweat; You can get fruits of the earth; Cain [3].

When in a society sin against others is rife, the land is closed and rejects its inhabitants. Those who live in desolate cities marginalization and oppression look and see: Surely you will see that this is so.

We are in the Age of Grace, the time where the Lord shows mercy to all who repent, where listening to all who intercede for forgiveness for sins, not only for themselves but also for the nation.

A Church that calls for forgiveness from sins of the major and rulers (Daniel 9) to one's sins is a church that opens an opportunity for Earth stops throwing its inhabitants, to begin to fall Sanitation heaven, that Darkness recede, so the vicious cycle be broken to give Virtue.

Week 70 is about to begin, God has subjected all to disobedience, to have mercy on all [4]. Pray for Mercy for the suffering, the hungry, the poor, the oppressed, those without exit. Pray that iniquity may repent, cease to do evil and learn to do good. For God to heal our Nations.