Reflection. Ma'lula Crucifixion of Christians in Syria . 2013. Massa By Fabian .

Ma'lula is a small town of 3,000 inhabitants near the city of Damascus , Syria. In it the same type of Aramaic spoken by Jesus in the first century is still spoken 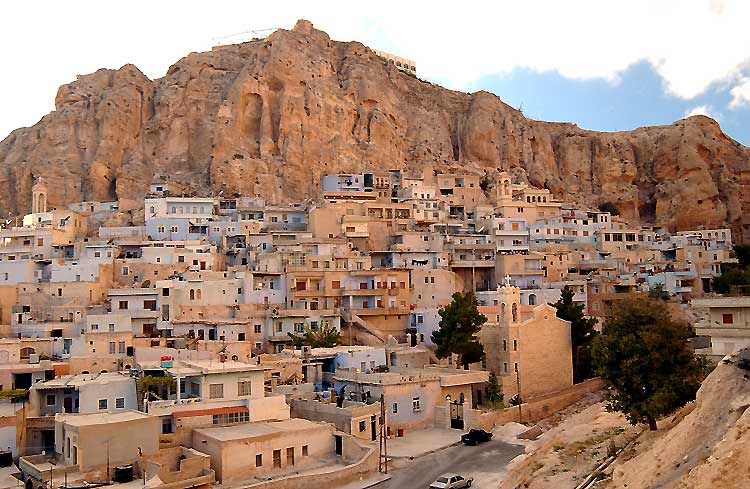 9 When he opened the fifth seal, I saw under the altar the souls of those who had been slain because of the word of God and to be faithful in their testimony. 10 cried with a loud voice, " How long, Sovereign Lord, holy and true , still will not judge the inhabitants of the earth and avenge our blood ? " 11 Then each of them was given a white robe , and they were told to wait a little longer, until the number of their fellow servants and brothers who were to be killed as they were completed.
Revelation 6.9 , NIV .

In September 2013 it became the scene of battle between the jihadists of Al- Nusra Front ( related to Al Qaeda ) and the Syrian Army [1 ] . After intense fighting , on 21 October , the rebels retook the village. Approximately 13 people were killed and many others were injured as a result of bombing by the Islamist forces .

On October 28 , government forces recaptured the town.
But the fight for the little town was still fierce and alternately earned jihadists and then returned to retrieve the government. As of today , 03/05/14 , is under the regime in Damascus .

According to Sister Raghida (Religious Patriarchy Greco - Catholic, teacher ) who is now a refugee in France, the Syrian villages are occupied by armed elements, jihadists and Muslim extremists who offer Christian groups the shahada ( the Muslim faith ) or death. In some cases demand ransom for not killing their victims.

Raghida Account:
"If you want examples, Maaloula crucified two young because they would not say the shahada . They said, " So you want to die like his master (Jesus ) that believe . They have a choice : they recite the shahada or be crucified . " And they crucified . There was one who was crucified before his father . They even killed their father. This happened for example in Abra, in the industrial area on the outskirts of Damascus. As they entered the city , they began to kill men, women and kids. And after the slaughter , the heads were carried and played football with them. As for women , their babies took them and tied them to trees with their umbilical cords . Fortunately , hope and life is stronger than death " [2 ] .

According to the prophecies of Revelation , evil will increase until around the world the trend is the same : A merciless war against Christians.

The Scriptures are being fulfilled before our eyes , at published in newspapers, files are freely available on the Internet, however the vast majority of Christians are not aware of what happens , which is simply that the times are close Finals.

Week 70 is about to start at any time: Are we ready?