Reflection. Abuse of authority in the Evangelical Church. By Fabian Massa. 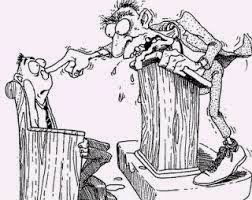 Abuse of authority , also known as abuse of power, are common practices in secular sphere , whether in business , politics, or school. Abuse of power occurs when the authority or person having power over others, because of his inauguration, social position , wealth or knowledge and uses that power to their advantage and in turn, allows others to be exploited.
When an authority or superior leader surpasses the performance of their duties demanding a subordinate , manipulating things that do not correspond with any threats or harm the person if they will not obey .

In countries where most people has developed in a dictatorial environment, there is a tendency to accept (and even support and promote ) as " Natural" abuse of power . This can be seen clearly in Latin America , where leaders " mystical " where leaders become " warlords " of a top-down government are common. At this time I am writing this post there are many Latin American governments led in this way ( with the support of the majority ) as the case of Maduro in Venezuela , Rafael Correa in Ecuador and Cristina Kirchner in Argentina , etc ...
There can not be a ' Abuser of Power " without people to do the game and want to look be subject under the guise of the" Great Leader that meet all your ills . " Is, necessarily gives a set of Abuser - abused.
The countries under this scheme generally have an economic profile of structural poverty , social differences between inner-city and rural populations (at gral. They are abysmal ) , high level of corruption , are unstable politically, economically and financially having large spikes up and down alternately. This type of government is usually a speech ( an "official story" ) completely divorced from reality, a repressor to all "critical " and are submerged into large "conspiracy theories " against the institutional order system. They generally have a fairly large population and poor education benighted masses ( as befits a dictator who wants to submit to the people ) .
The same profile a population , will have all the social structures that develop in the same ( more or less ) , as are formed by the same human elements. Within these social structures we will then find a tendency to authoritarian leadership , a divorce between rhetoric and reality and a refusal to any criticism that comes from the bottom of the structure.

Abuse of authority in some evangelical churches

One can see that in some pastors and leaders are having a tendency toward authoritarianism . This abuse of power is manifested in the issuance of rules and regulations that have no biblical support (not based on doctrine ) .
Authoritarianism is evident in education, when indoctrination rather than teaching ( transmitting them " your truth" or " interpretation of Scripture " disqualifying any other position ) .

I remember a meeting between brothers , which were sharing the Word of God, each contributed some verses to talk, at one time a brother shared some of the NIV version and which led said : "Christians read the RV60 " .

Authoritarianism is also evident in the need for many of these leaders to exercise " control " over the congregation . In this connection a pastor recently commented that in his church all groups of workers of different ministries armed groups in the network Whatsapp phone text messages and he is listed in all , so that the notes and write think each of the members of the church .

" One of the manifestations of authoritarianism, is the desire to control everything "

The need for "Control " authoritarian born of an inner insecurity , fear, as a result of insecurity. And of course to do this, the method used is legalism , then say : "We will impose standards . Let's say they can not do this , can not do that , you can not go there or there, who can not read this or that " , that way manage to have controlled the congregation .

A few days ago , I witnessed a call from a very prestigious Minister in Theology course , to read only the Bible RV60 ( In his own ( the highlight of one of the largest and most important organizations of Argentina Member ) words, the Church has virtually prohibited other version) , not to read books pollutants ( can only read what he has approved ) "Authorized " material is not much more than his own sermons , articles, and two or three short texts of his authorship ) . To give more emphasis to its position, clearly stated that any opposition to the teaching of Pastor of the Church should be taken as :
a. " A breach of the Order Head (Christ) and body ( the church) " With which excludes any possibility of saying "No" when the person does not end up convincing him what the Pastor says .
b . Rebellion against authority is rebellion to God. Based on the biblical statement that all authority was placed by God [1 ] obviously all opposition to Pastoral provisions should be understood as " rebellion to God" and entail the eternal punishment in the "Lake of Fire and Brimstone " , thus manipulates weaker minds , which plunged into a religious fear and end up submitting saying yes to everything the Pastor say.
c . Objections as rebellion. Generally not accept objections , which are taken as criticism ( destructive ) disobedience , rebellion , root of bitterness , gossip, etc, etc, etc. .
The most used argument is Infallibility [2 ] , so criticized the Catholic Church for their belief in Papal Infallibility , ( so often the story undertook to prove he was not such). So while Catholics have " a Pope who serves " evangelical Christians have myriads of " infallible Shepherds" .

The apostle Peter refers specifically to authoritarianism in the church :

2 care as shepherds the flock of God that is your charge , not by obligation or for dishonest gain , but eager to serve , as God wants . 3 not lording it over those entrusted to their care, but being examples to the flock. 4 And when the Chief Shepherd appears, you will receive the unfading crown of glory. NIV 1 Peter 5.2-4 .

The exercise of authority from the biblical point of view is to prepare and encourage others to overcome and once you have achieved your goal , promote . In this way the organization grows in terms of maturity, self-improvement , work , study and spiritual growth.

In an organization based on the authoritarian verticality , people grow within the structure for permanence, to attend all meetings, always say YES, have a subservient attitude. Thus leaders rise without sole discretion without biblical basis for a moment that can not solve anything if you do not consult "Up" .

The simplest way to define authoritarianism, as anyone would when you hear the word ; Abuse is abuse of authority or power. This contrasts with just what is the authority which is to serve, to facilitate the development of those you are leading. When a group of people are under the figure of an authoritarian leader this group of people do not grow , do not grow , but rather stagnate because it is not serving the kingdom, but are serving the interests of a person.

A Christian leader is a person whom God has given abilities ( gifts) to influence on a group of people and help them develop to enable them to fulfill the call that I received from God .

The authoritarian shepherd usually lock the access of people to their calling, not leaving or not leaving out study to fulfill their ministry and raising instead to only know say YES .

As leaders, let us strive to be a blessing , to encourage his brother to overcome. For those of us who have a call to teaching , I think one of the best things we can do is provide them with options and tools for our students to develop their own criteria, so that strong leaders nancy formed , which able to distinguish his call and have faith to follow , and come to fulfill what God intended for them.

To break the yoke of authoritarianism (which is fairly widespread , at least in Argentina ) , we can only pray and ask God to open doors, to touch hearts. Pray for us to have a church in Christ , where we can serve. A Church to look for out the Great Family in Christ ( all churches ) instead of looking inward, where everyone takes care of his garden.

[1 ] 1 Everyone must submit himself to the governing authorities , for there is no authority except from God , and those that exist have been established by God . 2 Therefore whoever resists the authority, resists the ordinance of God ; and those who resist will bring judgment on themselves. Romans 13:1-2 KJV 95
[2] http://www.lasemana70.com/2014/02/reflexion-la-infalibilidad-en-la.html ; http://www.lasemana70.com/2014/02/reflection-infallibility-in-catholic.html