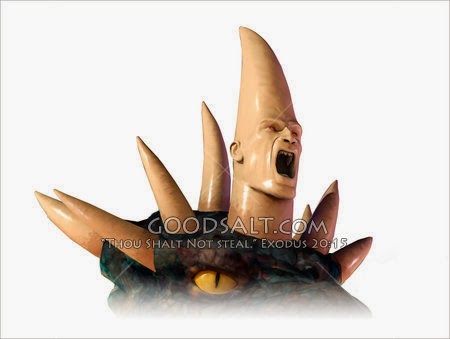 In the first part of this brief study [1 ] we saw in the dream of Nebuchadnezzar (Daniel chapter 2) the king had we had the vision of a huge statue , which had four distinct sections , and each of them had a relationship Daniel 's vision of chapter VII.


There are several details to consider:


It is a single statue representing a World governments uninterrupted system , since each of the four kingdoms ruled around the time of their " known world."
Each of these governments was replaced by another who occupied the same territory as the previous soaking . The Persian Empire adopted many Babylonian positions. Then the Roman Empire of the Greeks took their religion , and logical reasoning , adding the Roman pragmatism. During the time of Rome the Greek language continued to be a lingua franca and Greek culture permeated throughout the Roman Empire , up to this day . Our culture is basically Greek : In science, the arts, sports the Greek spirit is still alive. In music for example the scales used correspond with the Greek musical scales the Empire of Alexander [2 ] were used.

Arguably, each of these empires was a "New World Order " in a series of trials were improving from empire to empire. The Babylonians and Persians had a good attitude toward the things of God . Both Nebuchadnezzar and Cyrus had recognized that "the Govern Sky " :


But the Greeks and Romans had a very negative attitude towards the Lord. Among the Greeks , the opposite was undoubtedly Lord Antiochus Epiphanes , who enacted several ordinances antireligious type : tried to suppress the worship of Yahweh forbade Judaism suspending all kinds of religious expression , commanded from eating foods considered unclean and treated to establish the worship of the Greek gods :

20 . The year 143, after beating Egypt began the journey back. He went up against Israel and came to Jerusalem with a strong army .
21 . He arrogantly entered the sanctuary and the altar was carried gold , chandelier light with all accessories ,
22 . the table of proposition, pouring vessels , the cups, the golden censers , the curtain , the crowns, and tore all decorated gold that covered the facade of the Temple.
23 . He also appropriated the silver, gold , valuables and the hidden treasures he could find.
24 . Taking it all went to ground after spilling a lot of blood and speaking with great insolence.
25 . Across the country there was great mourning for Israel.
26 . Chiefs and elders groaned , maidens and youths languished , the beauty of women faded
27 . The bridegroom took a song of pain, sitting in the marriage bed , the wife was crying.
28 . The earth shook for its inhabitants , and all the house of Jacob was covered with shame.
29 . Two years later, the king sent to the cities of Judah Misarca , who came to Jerusalem with a strong army .
30 . Maliciously spoke words of peace and when he had gained the confidence , suddenly fell on the city and dealt him a blow killing many of the people of Israel.
31 . He plundered the city, burned and razed their homes and the surrounding walls .
32 . His men made ​​captive women and children and seized the cattle .
33 . After rebuilt the city of David with a great and strong wall , with mighty towers , and made it their Citadel.
34 . They settled there a sinful race of rebels, who were strong in her.
35 . The provided arms and provisions, and placed in it the booty they had collected the sacking of Jerusalem. It was a dangerous loop.
36 . He became ambush against the sanctuary , in evil adversary to Israel all the time .
37 . Shed innocent blood around the sanctuary and desecrated .
38 . For them the inhabitants of Jerusalem fled ; became her room of strangers, strange to them which were born , because their children abandoned .
39 . It was his sanctuary desolate like a wilderness , her feasts turned into mourning, her sabbaths into ridicule, contempt in his honor .
40 . As his fame grew from his dishonor, his greatness grief returned .
41 . The king wrote to his whole kingdom that all should be one people
42 . and leave each their peculiar customs. All the Gentiles accepted the royal edict
43 . and many Israelites accepted their worship, sacrificed to idols and profaned the sabbath
44 . To Jerusalem and the cities of Judah the king did arrive, by messengers , the edict ordering the country to follow strange customs .
45 . They had to remove the burnt sanctuary, sacrifices and libations , profane Saturdays and holidays;
46 . defile the sanctuary and the holy;
47 . raise altars and sacred precincts idolatrous temples sacrificing pigs and unclean animals ;
48 . leave their children uncircumcised , back their souls abominable with all manner of unclean and profane ,
49 . so that would change the law and to forget all their customs .
50 . He that he should act according to the command of the king, would die. 1 Maccabees 20-50 Jerusalem Bible .

Among the Roman emperors , there were several who persecuted the Church and tortured and killed Christians [3 ] , as Nero and Domitian . [4]

So far we have prophecies have already been fulfilled and we can check it by reading the biblical prophecies and about at the history books to see how, when and by whom they met.

In the third and final part of this study , we see that part of the prophecy yet to be fulfilled.