Jihad, the Islamic Holy War in January 2014 . By Fabian Massa. 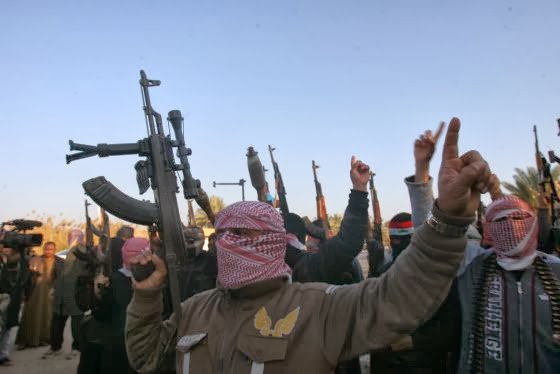 The Jihadist Brigades Al Qaeda ( whose ranks can be found men of Chechnya , Libya , Yemen , Azerbaijan , Iran , Pakistan, among other countries) has called on Sunni governments of Syria and Iraq.

Currently , Iraqi President Maliki fight solo , launching an offensive beast against the city of Ramadi , which have killed scores of jihadists, and asking citizens of Fallujah acting to eject from there to Al Qaeda , thus avoiding military campaigns that needlessly harm the civilian population. Al Maliki appeared on national television yesterday to ask " the people of Fallujah and their tribes to expel terrorists " to prevent " its residential areas are at the mercy of the danger of armed clashes ." He also said he has given orders to the generals of that time not falling "on residential areas of Fallujah ." In the past three days have more than 200 people died in those clashes [1 ] .

At least 274 people have died in early January of 2014 in clashes between jihadists and rebels in northern Syria , according to the Syrian Observatory for Human Rights, as the head of Al- Nusra Front called for the cessation of fighting.
The Syrian Observatory for Human Rights ( OSDH ), which has a wide network of activists on the ground , said that 129 moderates rebel fighters have been killed in fighting groups and 99 members of the Islamic State of Iraq and the Levant ( EIIL ) and 46 civilians.
Just this Tuesday, 34 foreign jihadists, mostly belonging to EIIL (linked to Al Qaeda) were killed in clashes with Syrian rebels in the Jabal Jawiya in Idlib province in northern Syria .
Since last Friday, three coalitions fighting insurgents and EIIL , an indigenous group in Iraq until recently was an ally of the rebels against the forces of the regime of Bashar al- Assad develop.
The leader of Al- Nusra Front , Abu Mohamed al Yulani proposed a plan to end the fighting, including a ceasefire and a prisoner exchange Tuesday.
The jihadist movement emerged in Syria under the name of Al- Nusra Front in January 2012 , with the arrival of Iraqi jihadists led by Abu Bakr al- Baghdadi , head of al Qaeda in Iraq . [2]
While the Muslim Brotherhood have lost control of Egypt, the jihadists are trying to master the ground in Iraq and devastated Syria.

Jihadism is a Western neologism used to refer to the most violent and radical Islam within the political branches , characterized by frequent and brutal use of terrorism in the name of a supposed jihad. Jihad has two forms : the " lesser jihad " , the external struggle and the " greater jihad " is the effort that every believer must make to be better Muslim.

Encyclopedias often define jihad as the struggle against infidels and apostates in the name of Allah The Arabic word Jihad deriba YAHD meaning " effort " , especially in the warrior and military sense. According to Samir Khalil , the word jihad is used in the Qur'an with the struggle for meaning is God or struggle the way of God Jihad fi Sabil Allah.

Jihad is an essential concept in Islam , and therefore so is their manipulation and abuse by radical Islamists and is one of the fundamental pillars on which justify their crimes and atrocities . For every Muslim jihad , whether higher or lower is the most important after the implementation of the five pillars of Islam obligation : the shahada or profession of faith, the five daily prayers, the Zakat or alms , fasting in the holy month of Ramadan , and finally , make - if the media and health permit, the greater hajj or pilgrimage to Mecca at least once in life.

There is some confusion among Western scholars of Islam about the true meaning of Jihad and the differences between major and minor Jihad , often enhanced by selfishly That islamistas.83 radicals repeatedly define jihad exclusively on the spiritual meaning of the term. It is a deliberate way to hide their own purposes in the public eye . As for radical Islamists important sense the war .
"In the spirit of some Muslims, what they perceive as the current decline of Europe , makes this an opportune time to recover what they consider their own time. Not all Muslims believe that the conquest of the world to take place through an offensive jihad : probably most of the world's Muslims do not share that point of view But if, as I am told experts in the field , one fifth of the Islamic world is deeply influenced by an Islamist ideology that teach an offensive jihad. that makes 200 million people , and is much infected by a political disease that presents itself as a people of religious conviction . " George Weigel

Most Jihad has a spiritual meaning which represents the effort that every believer must make to be better Muslim, a better father , husband or lower its persona.La Jihad warrior meaning of Jihad , military action with religious significance.

While the difference between greater and lesser jihad has its importance and validity , meaning the war has been historically used by theologians and religious leaders and the most used in the past fourteen centuries. At the beginning of Islam was more important the greater Jihad in the sense of interior and moral struggle. However, as the need for survival prevailed also involved the expansion of Islam is emphasized in the military meaning.
Jihad in its military concept has also been employed to legitimize domination and conquest of new territories , but also to justify the war effort , to retrieve Islamic land and punish the enemies of Islam. Using within this doctrinal framework , the most brutal and indiscriminate , disproportionate and bloody procedures.
A group of Bedouin fighters approached the Prophet and he said to them : You have done well coming from the most minor Jihad Jihad . And they asked him : What is the greater jihad ? To which the Prophet replied : That the man of God fighting their passions. The Book of War (Al Kitab al- Jihad ) [3 ] .

What is the goal of Jihad ?

It's simple, primary objective to impose Islam and the infidels , ie WORLDWIDE today does not confess that Allah is God and Mohammed is his prophet. The secondary goal is to wipe Israel off the map. The more radical groups give conversion to Islam as the only way to stay alive and rush the implementation of Great Chaos to finally manifiste the Great Mahdi , the Messiah . [4]