Article . The " Ouija Board " and the demonized girl in San Pedro . By Fabian Massa. 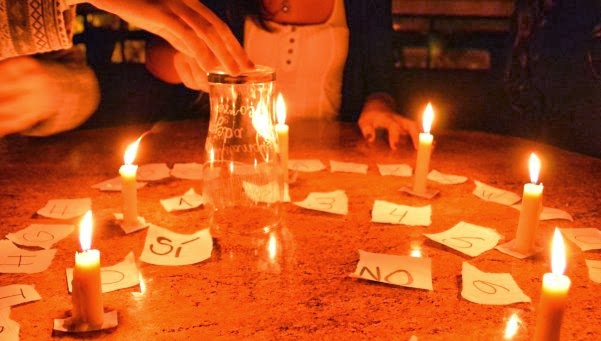 San Pedro is a beautiful northern city of the province of Buenos Aires , Argentina. It is a quiet town on the banks of the Parana River. In early January 2014 a rare drama erupted in a traditional family in the city , which has a strong Catholic tradition. The 12 year old girl named Milagros , began to have a strange behavior that frightened her family .

The mother tells : " It swells the belly and you form a face It's like having a person inside that will not let be quiet We are asking the help of someone who engages in such things. . ."

It all started after the child going to a " pajama party" at the home of a family friend . As part of the games that night , there was a session of " Ouija Board " or " Cup Game " Miracles participate as a spectator game .

A week later, began even strange attitudes that led to the internment of Miracles, but just a day after he was discharged . "We have seen how swells the belly and will form a face , it moves me everywhere, like that he wants to leave , the same happened to his arms , they were like fingers that he wanted to leave ," said the mother.

The girl 's voice changes , much thicker , has aggressive behavior and says for example ' I killed my sister ' , starts laughing at certain times, has been scratched, hurt and even spoke of suicide , write the word God in a paper and blemish, wants nothing to do with God , they put the bible and reacts violently .

In his Facebook profile that you want to die wrote and asked ' I want you to take out this crap .' " When asked the name she gives the name of a deceased person here in San Pedro .

They videotaped the strange behavior of Miracles : " You can see that the baby begins to breathe hard , is vomiting , make sudden movements ."

The origin of the Ouija board provided with letters and numbers that supposedly can make contact with the spirits of the dead, is vague . A quite similar to a Ouija board was found around 1,200 BC in China, where some scholars accustomed to guide a stick around a tray filled with sand to communicate with the spirits of the Hereafter . Other sources claim that Pythagoras, in 540 BC conducted seances with a kind of board with wheels that he himself called " the mystic table " .

The Ouija really popularized the hand of the spiritualist craze that swept across the West in the late nineteenth century. Acquired such a reputation that many people began to hold meetings organized Spiritualism , which asked the spirits and the answers were answered by a series of shocks or jolts. It has , for example, Mary Todd Lincoln , wife of President of the United States Abraham Lincoln, held meetings in the White House itself regularly to communicate with their deceased children .

There is a spiritual world we can not see but it's there , though separated from our dimension. The Cup Game opens a portal between the two worlds, that God forbids raising the dead (Leviticus 20.27 ) putting such activity capital punishment, as to make clear the danger . The family depends now and find a true Son of God whose ministry is the Demonic Liberation. Only Christ can save that life .

The spiritual is not a game, as has sadly proven this family of San Pedro . The dire consequences of those who work against God's Word depart published in newspapers . [1]