Study. Babylon by Herodotus , the "Father of History" . By Fabian Massa. 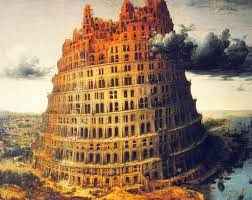 ( Ἡρόδοτος Ἁλικαρνᾱσσεύς ) was a Greek historian and geographer who lived between 484 and 425 . C. [1 ] In his book " The Nine Books of History [2 ] " is the next section , which describes the city of Babylon and the Tower of Babel

CLXXX . The city ( of Babylon ) is divided into two parts by the Euphrates River, which passes through it . This river , big, deep and fast , low of Armenian and will lead to the Eritrean Sea ( Gulf Today ) . The wall , by Entrambas parts , making a bend to reach the river , and from there begins a wall made of baked bricks , which runs through the city along the banks of the river inside . The city full of houses of three and four floors , is cut with a straight streets, which run along , as the transversal that cross them and go into the river . Each of the latter has a bronze door in the fence that runs along the banks of the Euphrates , so that there are so many doors that flow into the river , how many neighborhoods between street and street.

CLXXXI . The wall on the outside is like Lóriga (defense, strong wall ) of the city, and on the inside is another wall also encloses , which is narrower than the other, but not much weaker. In between each of the two quarters in which the city is divided , there are two palaces raised . The one is the royal palace , surrounded by a large wall of resistance , and in the other a temple of Jupiter Belo with its bronze doors . This temple , continuing into my days , is square and each side has two stages ( 348 m). In between he leaves made ​​a massive tower that has a stadium and another tall thick. About this rises another second , then a third , and so on up to the number of eight towers [3 ] . About all there is a ladder on the outside and in the middle of the stairs with a landing seats, where they can rest their climbing . In the last tower is a chapel , and within it a great bed beautifully arranged , and beside a table of gold. There is no statue there , and no one can stay overnight , outside of one wife , daughter of the country , whom God chooses among all , according refer the Chaldeans , who are their priests.

CLXXXII . They also say the Chaldeans (although I do give them credit ) coming hours and passes the God sleeping in that bed , just as happens in ( Temple ) Thebes in Egypt, as the Egyptians tell us where you sleep a woman in the Theban temple of Jupiter .....

A massive tower ... having a stadium and another tall thick. The stadium was a Greek unit of length, taking as a standard the length of the stadium of Olympia, which amounted to 174.125 meters . In antiquity there was a single measure for the stadium. If we take the Greek stadium , we have the base of the tower was a square of 174 m side .

About this rises another second , then a third , and so on up to the number of eight towers . The tower design corresponds to that of a wedding cake, each square should be slightly less wide, leading to the stairs. If each of the levels was 174 m total height of the tower, according to Herodotus , was 1392m . totally impossible figure , even to this day.

In the last tower is a chapel (the " House Foundation of Earth and Sky " ) , and within a superbly prepared bed, and beside a table of gold. The objective of the chapel, was to provide a suitable environment where a woman priestess , daughter of the country, chosen by the Chaldean priests .

It is important to understand the symbols : The tower is the "path" where the ruling " Upgrade " from the earth ( natural) stairs ( each step a degree of learning) reaching different " levels " (" spiritual states" ) - the ziggurat of Babylon had seven stories ( 12.8 meters each , ie a journey of seven levels of the spirit ) - from the land to the place where they had "contact" with his divinity, during intercourse with the Priestess ( therein embodied deity ) "union of Heaven and Earth " ( the union of heaven - what occurred spiritual spirit is incarnate in the earth - priestess and the carnal - represented by the agent .

Thus, indirectly or their union produced a covenant based on the sexual act itself - one meat = one spirit - between a human and a spirit [4 ] ) . This sexual union guaranteed a year of fertility for the fields , livestock and for the inhabitants of the kingdom, and the general prosperity of the land . When the ruler down , and was just an ordinary man , but a " god." They were convinced that it was real, and acted accordingly , the ruling tyrannically subjected to all his constituents , since for him were mere "mortal " to his "divine" service. This is the seed of the "spirit of Babylon " the root of all religions and principle of all evil. Both the archaeological record , as the information given by Scripture , the first kingdom after the Flood was " one people with one language ." This means the same way of thinking and feeling things , history , religion , science and philosophy common to all life . They also brought in his memoirs the stories of what life was like "before" the Flood [5 ] .

It can be said that Babylon is the source of all idolatry. These pagan cults then be replicated in other cultures , across geographical , cultural and temporal boundaries , up to this day .

Week 70 is about to begin . It's good to identify the origin of idolatry , to recognize today. Are we ready ?

[1 ] http://es.wikipedia.org/wiki/Her % C3 % B3doto
[2] http://www.ebooksbrasil.org/eLibris/nuevelibros.html
[3 ] Obviously an exaggeration, because according to this design , the building would have more than 1,400 m
[4 ] This type of relationship between humans and spiritual beings suggest in Genesis 6 . This text indicates that would be made explicit and not figuratively . "The sons of God and daughters of men" discussed in Chapter VII issue.
[5 ] also brought the memory of the idolatrous and occult practices .