Study. Nimrod and the first try of the "New World Order " . By Fabian Massa. 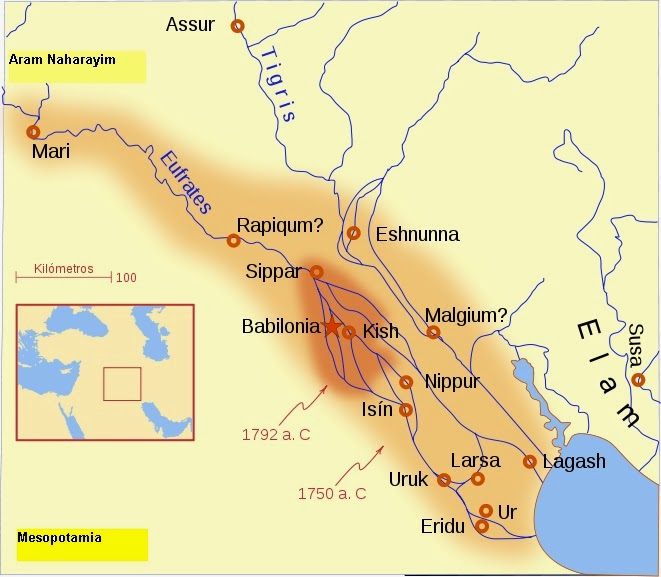 The first reference made to Nimrod in the Bible is in Genesis 10.8 , which also indicates that it was the " mighty one in the earth" after the Flood. Scholars link the name Nimrod with the verb " Marad [1 ] " rebellion , if this is correct , the phrase 9 He was a mighty hunter before the Lord should be understood as a mighty hunter faced God.

Nimrod was the son of Cush , grandson of Ham and grandson of Noah. He submitted all his competitors and won the absolute power over all humanity of their time and tried to impose a " New World Order, " contrary to established by the Lord , who had given leadership to Sem.


Jamieson [6 ] says that this great ability to hunt wild animals ( a threat to the first villages ) have gained the favor of the people , besides giving him great fame . No doubt this popularity , a great capacity for leadership and population explosion is revealed in Genesis chapter X , have been the basis of Nimrod to organize the first empire in the post-Flood Era .

Some scholars have attempted to identify Nimrod with Sharrukin [ 2] or Sargon of Akkad [3 ] , the founder of the First Empire ( Akkadian) that can remember. Others see in it the figure of the Assyrian god Ninurta [4 ] , the god of war and hunting , as Nimrod , was happy to hunt their enemies . [5]

The beginning of his kingdom was the city of Babel, and soon expanded in the lower Mesopotamia founding other strengths :

10 And it was the beginning of his kingdom was Babel , Erech , Accad, and Calne, in the land of Shinar.

Then, once strong in the south began his campaign to the north :

This military expedition of conquest was occupied by the Semites [7 ] tribal territories. We see that making a deeper reading of the text can deduce a war even if not expressly indicated [8 ] . The claim his kingdom was achieved with the subjugation of all the tribes , and territorial expansion was consolidated with the construction and organization of the population in cities - states.

This whole process obviously took time , although no explicit data , the approximate time could be deduced from the following information: Peleg ( whose name is perpetuated in the city Phaliga ) have lived from approximately 2269-2030 . of J. C. Its name means " division " because " in his days the earth was divided " , ie, " the people of the earth" ; "from there the LORD scattered them over the entire surface of the earth ," but we must not take this date as a determining factor , there really is not all records are guesses .

Since then Satan will seek to impose their New World Order , each of the Great Powers was an attempt that failed :

Although each of them had a limited chance of winning big success , God finally destroyed them all . With the same last will finally victory will be the King of Kings and Lord of Lords .

[1 ] Strong # 4775 Marad : Rebellion, rebel , rebel .
[2 ] Sargon of Akkad , also known as Sargon the Great ( Akkadian Sharrum -kin , " legitimate king ", " true king " ) ( c. 2270 BC - 2215 BC , according to the short chronology ) [ ] was the first person recorded history to create a true Empire Akkadian Empire. His descendants ruled Mesopotamia for the next century and a half. http://es.wikipedia.org/wiki/Sarg % C3 % B3n_I_de_Acad
[3 ] Akkadian Empire : It extended from Elam to the Mediterranean region including the Tigris and Euphrates rivers , parts of modern Iran , Syria, and possibly parts of modern Turkey . Its capital was Acad (also known as Agade ) .
[4 ] In Akkadian and Sumerian mythology , Ninurta ( Nin -Ur : Lord of the Earth or Mr. Plow ) was the god of Nippur , also identified as Ningirsu , Ninib or Ninip . Conformed a triad of gods Enlil with his father and mother Ninlil . Usually represented holding a bow , a spear and a magic hammer called Sharur , which could speak and transform into a winged lion .
[5] http://es.wikipedia.org/wiki/Nemrod
[6 ] Exegetical Commentary Old Testament Bible Jamieson , Fausset & Brown , page 28.
[7 ] Jamieson , page 28.
[8 ] Similarly it can be assumed that in Genesis 6.1, when " the sons of God took the daughters of men" was also by force of arms.