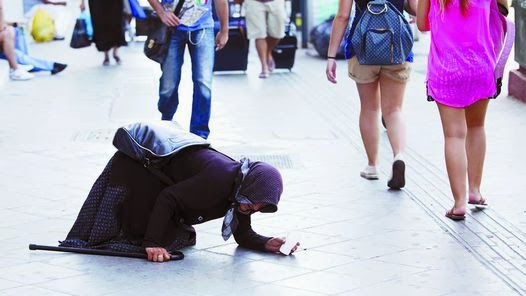 5 When the Lamb opened the third seal , I heard the third living beings, who shouted, " Come! " Looked,and a black horse appeared ! The rider had a balance in his hand. 6 And I heard a voice among the four living creatures saying , "A kilo of wheat, or three kilos of barley for a day 's salary and do not damage the price of oil and the wine . "

In this text there are several symbols that we have in mind in order to understand the depth of this prophecy,and a black horse ! The black color is associated with starvation . In the Bible the prophet Jeremiah takes a description of the sorry state of the citizens of Jerusalem during the siege of it by Nebuchadnezzar's troops [6 ] :


7 Her Nazarites were purer than snow, whiter than milk;
More blondes were his body than rubies , their most beautiful thing of sapphire . 8 blacker than the blackness is its appearance ; are not known in the streets ;
Their skin clings to their bones, dry as a stick.
9 They were slain with the sword that killed by hunger;
For these pine away, stricken through for want of the fruits of the earth.
Lamentations 4.7 - 8RV60 .

A kilo of wheat, or three kilos of barley for a day 's salary , ie the gains in a day's work just to buy basics reach .
Afectes ... but not the price of oil and the wine . The crisis will not affect large sectors of resources, but only the proletariat . This prophecy is being fulfilled to the letter , the rich are getting richer while the townspeople are going real calamities . [1]

This text was published in bluish in the post " The Four Horsemen of the Apocalypse" on February 24, 2013 . On this day , December 7, 2013 the European situation has not improved substantially. According to data published by Eurostat ( the European Bureau for Statistics ) one in four Europeans is poor , ie 124.5 million in Europe 's poor .

Even in countries " Rich " in Europe , the poverty rate has reached alarming figures :

Let there be hunger and poverty in countries such as Ethiopia , Sudan and among sub-Saharan Overseas countries would be prophetic , but that there is hunger in aristocratic Europe self-sufficient and very striking .

In the first half of the 70th Week [4 ] will haunt the world the Four Horsemen of the Apocalypse :


After the description of the Four Horsemen 's Word mentions the Great Persecution against the Church of Christ :

9 When he opened the fifth seal, I saw under the altar the souls of those who had been slain because of the word of God and to be faithful in their testimony. 10 cried with a loud voice, " How long, Sovereign Lord, holy and true , still will not judge the inhabitants of the earth and avenge our blood ? " 11 Then each of them was given a white robe , and they were told to wait a little longer, until the number of their fellow servants and brothers who were to be killed as they were completed.
Revelation 6.9. NIV .

The persecution of the Christians and have openly unleashed in Iraq , Nigeria , Egypt.

Week 70 is about to begin . All prophecies are being fulfilled , which attests that the Word is true. Save your soul now , accept Christ as your Lord and repent of their sins. Find a church where the Word of God, time is running preached.