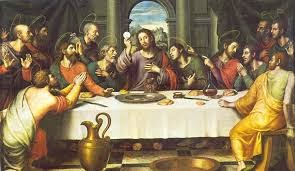 Treasures of Wisdom shares with us : The Lord's Supper .

The disciples, as directed by the Master, found the place to celebrate Easter. It was a room on a high floor , a large room suitable for the occasion. During the day made ​​all the preparations and towards sunset , they set the table for Passover. They were the guests of Jesus, who said :

15 ... ' I have eagerly desired to eat this Passover with you before I suffer , I say 16 because I do not eat it again until it finds fulfillment in the kingdom of God.
17 Then he took the cup, gave thanks and said :
- Take this and divide it among you. 18 I tell you will not drink of the fruit of the vine until the kingdom of God comes .
19 And he took bread , gave thanks , broke it , gave it to them and said :
- This is my body, given for you : this do in remembrance of me .
20 In the same way He took the cup after supper , saying:
This cup is the new covenant in my blood, which is shed for you .

The Gospel of Luke is the one who collects the order of Jesus to his disciples do this in remembrance of me , with reference to the bread and drink the cup of communion among the brothers.

The Passover meal was a celebration instituted by the Lord to commemorate the Exodus from Egypt [ 1] ( Exodus 12 ) . Arguably Passover is a " Preview [2 ]" Passover of the Lord , for He gave her a much deeper universal meaning [3 ] : By accepting the sacrifice of Christ , the bread and drink the cup , believers enter into the New Covenant which is by the Blood of Christ, the Lamb of God who takes away the sin of the world those who acknowledge him as their Savior .

Looking at the scene in the four gospels , we have each of the Apostles observed various details of the dinner :

Matthew ( 26 ) refers to the anointing of Jesus by Mary of Bethany, the betrayal of Judas and the Lord's Supper .

And Juan ( 13) focuses more on general issues : The washing of feet, the betrayal of Judas and Peter's denial .

Leaving aside that the holiday "Christmas" was instituted by the Catholic Church for several pagan festivals syncretize [ 4] to understand that Christmas is a convention to celebrate Christ , I ask:

Are we celebrating Christmas with the correct direction ?

At the table of the Word is spoken or commemorates the One who died for us?

Does it run and strive to buy many gifts and put them under a decorated tree pagan [5 ] , is biblical ?

Does the fierce consumerism these dates correspond to the order that Jesus said ?

It's time again to celebrate Christ.