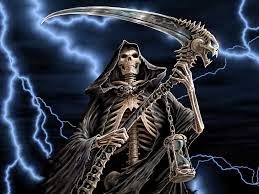 In Part I of this paper , based on a BBC article [1 ] , detailing both the Government of Mexico and the Catholic Church have come to the conclusion that Mal has won the Country , plunging society unlimited violence .

Almost daily in the suburbs of many Mexican cities , different face drug gangs in pitched battles . Often the discovery by police of people murdered in the most brutal ways: Beheaded , hanged, burned , dismembered , etc ...

Among the narcos rows is common worship Saint Death , whom the assassins seeking protection from rival cartels and the police . Even honor their patron with human sacrifices ...
More and more demonic manifestations among people , Catholic exorcists can not cope to meet so many cases of demon possession .

Biblically any response ? Two cases of cities where satanic activity was so overwhelming that the demoniacs were commonplace mentioned in the Bible :

We can see that in the two cases cited by the Bible demonic activity was directly related to idolatry and exactly what is happening in Mexico today: Idolatry has meant that this territory is taken by Satan and the forces of Evil

And why I say that the Catholics can not with this? Simply because they also practice idolatry , worship images , statues honoring works of the hands of craftsmen. In the third part of this article , see the close relationship between idolatry and Satanism .

Week 70 is about to begin. Jesus prophesied that in recent times the Evil grow greatly. Are we ready ?