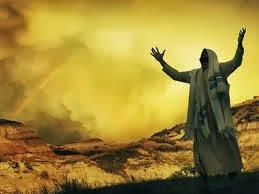 נְבִיא Prophet and False Prophet.
In the Bible, God speaks through the prophets , until the time of Jesus , as it explains the author of Hebrews :

One God , many times and in various ways spoke to our ancestors in the past by the prophets , 2 in these last days spoken unto us by his Son. Whom he appointed heir of all things , and through whom he made the universe. Hebrews 1:1-2 NIV .

Historically , God raised up prophets when the priestly class was not doing their job and for this cause God's people slipped from the " Old Paths " marked by the Word of God. The prophets were usually people of character , for example when a large group of young rebuked the prophet Elisha , mocking him because he was bald, the prophet cursed and left a grove near two bears who killed forty-two of these boys ( 2 Kings 2:23) .


Another example : On one occasion the King Ahaziah sent two armed contingent of fifty men each to bring his presence to the prophet Elijah. The captains of both groups went proudly to the Prophet who ordered the two groups on fire down from heaven and consume . Both troops were killed in this way ( 2 Kings 1.9 - 12)

The prophets do not hesitate to say what God commanded them , but the powerful could upset your , for example :
When Ahab [2 ] king of Israel was leading the people astray , dragging it to the corruption and idolatry , God raised up the prophet Elijah to announce a drought indefinitely [3 ] ( 1 Kings 17.1).
When Herod Antipas married Herodias ( the wife of his brother Herod Philip ) , John the Baptist will miss him in the face, no matter what the tyrant might do (Luke 3.19 - 20 ) .

And so we can give many examples of Jeremiah , Isaiah, Haggai , Zechariah , Hosea , Amos, etc ... The prophets were men of God , with the function of awakening the people you've been missing him back to obey the Lord's commands .

The last prophet was John the Baptist , who prepared the way of the Lord . Yet today many prophets have risen , they are very different from those of old: They do not call attention to the Pastors of Prosperity , not challenge the corrupt rulers , not rebuke idolaters, not the people to get intimate turn to God ... none of that .

And most desperate people seek this kind of "prophecy" are heaped like flies in honey to hear " what comes to the prophet of God said ," to know " how it will go ( financially) year comes "to receive a" word of power "that change your life .
Wake up all of you who are asleep , God spoke in His Word and made ​​clear that we are God's children reach their promises to us when we keep the commandments .

Stop waiting proxy statements and prophecies of prosperity of these " prophets " Or do not realize that they prophesy blessing only to then ask for their money ?

Jesus said, " But seek first the kingdom of God and His righteousness, and all these things (which you need ) will be added ." Matthew 6:33 NIV .

Week 70 is about to begin . Christ alone safely. Do not look for the easy way out for false prophets and follow the path that is narrow that leads to life .