Reflection. Is it necessary to believe in God to go to Heaven?. By Fabian Massa

The question would have made the journalist Eugenio Scalfari (agnostic), founder of the newspaper "La Repubblica". The Pope replied in an open letter: "God forgives those who obey his own conscience" 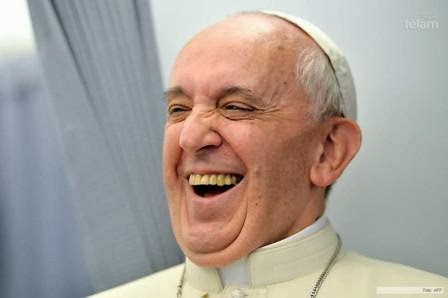 The letter of four pages is intended for non-believers. Pope contradicts himself, because on one side it says:

"The mercy of God has no limits if you are directed to the sincere and contrite heart" and "the truth, according to Christian faith, is the love of God for us in Jesus Christ and therefore the truth is a relationship."

To address God with "a repentant heart" at least two things are necessary:

To be on the "Truth of a relationship with Jesus Christ" is to believe in Him as God made man, died for our sins and was raised by the power of the Holy Spirit wrought in Him

Will Francis I the "Son of Perdition" that will cause many lost?

3. Let no one deceive you in any way. First must come the apostasy and demonstrate the wicked man, the son of perdition; 4. the Adversary that rises above all that which bears the name of God or is worshiped, so far as to seat himself in the temple of God, proclaiming himself to be God. 2 Thessalonians 2.3 - 4 Bible of Jerusalem.

Week 70 is about to start, missing very little. Are we ready?