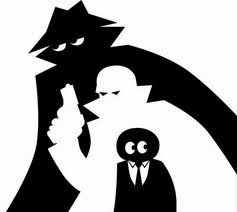 A feature of all radical group is that they have a "story" a particular perception of reality. When these groups come to power, override any attempt to groups that are not aligned with your "model".

If the field is politics, opposing factions will "coup opponents", "discouragement chain" as they say Mrs. Cristina Kirchner [1] or some disqualifying for style, as the fundamentalists do not argue to defend their model but usually disqualify depose and opposition [2].


To sustain this situation radical groups adopt the conspiracy theory or conspiracy theory, which can be defined as the attempt to explain an event or chain of events that happened or yet to happen , whether perceived or real , (commonly of political importance , social, economic , or historical ) , through the existence of a secret so powerful, extensive , long lasting and usually malicious . The general hypothesis of the conspiracy theories is that major events in history have been controlled by manipulators who organize events from " behind the scenes " and / or nefarious reasons or at least selfish . [3 ]

In the case of politics, radicalized in power (which itself is often called "revolutionary" ) often accuse the "cowardly opposition" of their own failures.

The best way to understand something is setting an example
A current case widespread unfortunately is what is happening in Venezuela : The group that governs this beautiful country has been in power for more than 20 years . Although we have ruled absolutely, (ie without the opposition could do nothing ) government policies have led to an emergency Venezuela economic, financial, energy, food and industrial . This Emergency Total has been recognized and declared by the government.

The country is in " economic emergency food supply" decreed by the government .
The nearly 100,000 million entrants oil sales are not enough to overcome the shortage and shortage of food ( oil, meat , lentils , margarine , beans , cheese , flour, milk ... ) and commodities, which causes long lines and lots of " arrechera " Venezuelan word used to summarize the state of anger.
Half of the hospitals suffering " technical closure " and survive with a third of the beds, without input or equipment , 70 % of the routes have maintenance problems and power outages continue after huge national blackout early September.
But if something suffer in their flesh the popular classes , and the scarcity (which exceed 45 % rise at the end of the year, one of the highest in the world) and inflation rising prices each week , is violence devouring a society in which death became something as mundane as life.
" The economic reality is about to overwhelm the government and may lead to collapse ," said Leopoldo Puchi , sharp analyst close to government positions .
Rocío San Miguel , president of Citizen Control for Security , Defense and the Armed Forces, was even more vehement in his opinion piece last Thursday .
"In Venezuela , or no dialogue for peace, with recognition and respect for the opposition, dissent and criticism , or no social unrest , as noted Cabello. A pressing issue , by the way , that is beginning to be discussed within national armed force ... " [4 ]
However, the authorities do not take care of their failure but blame the opposition ( who 20 years ago that does not carry forward any act of government), in a classic example of how the " Conspiracy Theory " .

Fundamentalists in the Church of Christ.

Radical groups , self-identified as orthodox or fundamentalist (where its foundation is the only true ) have infiltrated all organizations : Political , military, economic , religious, and of course also in the Church of Christ.

For Orthodox Christians, they are the only pure , the Elect , those who will be caught in the Day of Wrath , who will rule in the Millennium, in order that will be Saved . All who do not agree 100 % with your thoughts are about unbelievers , humanists infiltrators, lukewarm believers , false teachers, false prophets , apostates , gossips, people who criticize because they have a root of bitterness , etc, etc, etc. .

The Word of God teaches us that we must guard our hearts ( Proverbs 4:23) , for it is the wellspring of life . The arrogance, disqualify the other , contempt or scorn simply pollutes our hearts and exposes us to sin just like criticism, gossip or any other sin .
It also teaches us that if you think you strong , look lest he fall ( 1 Corinthians 10.12)
In Luke 18.10 Jesus tells a parable , where a Pharisee and a publican [5 ] had entered the temple to pray [6 ] .

The tax is recognized as a sinner , repent before God and leaves forgiven . The Pharisee is compared to the tax and be better than the other , it is believed righteous before God , and out of the Temple condemned.

God calls us to constantly review our position , not in comparison with others, but with the Word of God.

Week 70 is about to begin . Salva Christ alone .


How is your heart?