Reflection. The pride of the Pharisee. By Fabian Massa 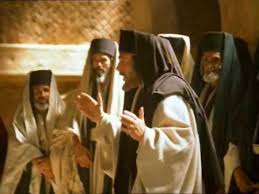 9 To some who trusted in themselves that they were righteous and despised others , Jesus told this parable : 10 " Two men went up into the temple to pray, one a Pharisee and the other a tax collector. 11 The Pharisee stood up and prayed about himself : 'God, I thank thee that I am not like other men - robbers, evildoers , adulterers-or even like this tax collector. 12 I fast twice a week and give a tenth of all I get . " 13 Instead, the tax collector , who stood at a distance , would not even raise his eyes to heaven , but beat his breast and said, "Oh God , have mercy on me , a sinner ! "
14 "I tell you that this man, rather than , went home justified before God. For everyone who exalts himself will be humbled , and whoever humbles himself will be exalted. "
Luke 18.9 - 14 , NIV .

The Pharisees were a Jewish sect that lived by the interpretation of the Torah [1 ] . The tax collectors ( publicans ) were Jews who worked for the Roman Empire collecting taxes (were considered " Collaborators oppressive Empire and therefore hated and despised).

So we have in this parable the two ends of the Jewish society of the time of Jesus :


The pride among Pentecostals .

There are many Pentecostals who have the same perception of themselves that had the Pharisee in the parable :

I. They have the correct interpretation , the others are " Humanist " . But when you need the services of a professional, looking for the best usually are poor and miserable " Humanists Unconverted " as doctors , accountants, lawyers and dentists , anthropologists , historians, etc. .

II. Only they have the fire of the Holy Spirit , others are without spiritual life.

III. They have the " gift of tongues " unintelligible chatter that nobody translated , others poor , have not received the "Baptism of the Spirit" . However, when training you need to buy the books Baptist theologians , renewed , Methodists and even Catholics, who do not have "spiritual life" but are those who know.

IV . They pray something like this : " I thank you Lord, for you have given me the fire of your Spirit , I pray for those poor ( from other denominations) that you do not even have known as we know you "

God have mercy on us who are sinners really just like the others, and the grace of God is manifested in us that our turn to give us conviction of sin and courage to recognize our sinfulness and ask for forgiveness .

[1 ] Torah or Law of Moses , the first five books of the Bible ( Pentateuch ) Genesis , Exodus , Numbers , Leviticus and Deuteronomy .