STUDY . Tell me what you eat and I will tell if grow . By Fabian Massa. 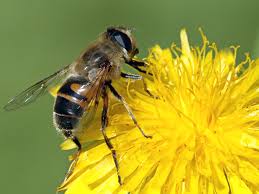 It is very interesting to study the bees , we can learn much from them . For example we now know that in a hive of honey bees [1 ] ( Apis mellifera ) there are three types of bee

a. Worker bees : it has developed the sexual apparatus , his mission in life ( about 3 month average ) is working to keep running the hive. The first three days of life eat royal jelly. From the fourth day his diet consists of pollen ( protein) and nectar (carbohydrates ) .


b . Drones : They are male bees , a little larger than the workers. They come from eggs unfertilized , so their genetic load is 50% of the other bees that if born from eggs fertilized . His mission in life is to fertilize the queen bee . After this, die .

c . The Queen Bees : They are genetically identical to worker bees . But they are chosen before even larvae to become queens ( has a calling different) . To this point are reserved for another mission , that their cells instead of being horizontal are vertical and much larger . (there are three times larger than a worker ) . The workers nurses only feed them royal jelly . They live about three years and are the only ones that have developed the sexual apparatus . His mission : keep the spice.

Why the Queens are so different from the workers ?

The queen is the only female that is fully developed sexually. This is the result of the total diet of royal jelly during the development period . Recently descubierto1 the active ingredient of royal jelly which converts to a working queen is protein royalactina (formerly protein 57 - kDa , by reference to their molecular weight ) [2] which activates the p70 S6 kinase , which turn increases the activity of the MAP kinase [3] .
Research from the 1960s suggested that royal jelly contains a neurochemical powerful , while a 1972 paper highlighted the hormones in development. More recently , scientists identified a set of proteins in royal jelly , potentially involved in the generation of queens.
You can make an interesting parallel with the Church : The brothers who can disciple others are those who have a greater development . While we all have in Christ the same spiritual DNA , what we eat makes a difference :

a. If a congregation only eat nectar ( sweet words ) , have conditions of workers . They can work hard and well , but will not have what it takes to lead others . They have not been fed so that they can develop fully .

b . If a congregation receives Royal Jelly ( a processed food ) which have the call to leadership ( pastor , teach, evangelize, disciple , etc. . ) To receive that food be developed so that they can train other leaders ( having " spiritual children " ) that sometime form another hive ( another church ) . So working the Apostle Paul.

Are we eating and feeding adequately brothers?


- Then is the faithful and wise steward , whom his master will put in charge of the servants to repartirles food at the proper time? 43 Blessed is that servant whose master , returning , finds him doing his duty . 44 I tell you what will set him over all his possessions. Luke 12 . 42-44 NIV .

Week 70 is about to begin . Christ is coming soon , find us feeding the good Word of God.

[1 ] Melis = honey fera Latin doers = producing honey . This is honeybees .
[2] http://es.wikipedia.org/wiki/Abeja_reina
[3 ] In the feeling that one of these proteins could be a key ingredient of royal jelly , Masaki Kamakura, an entomologist at the Centre for Research in Biotechnology in Toyoma , Japan , designed a simple experiment . It is stored royal jelly to a temperature that degrades the proteins at different rates and then tested whether the gelatin heat treated could make queens. It took 30 days for the power of royal jelly disappeared. Chemical analysis showed that a protein that was previously called royalactina was one of the slowest to break . The protein royalactin , when combined with other nutrients , transforms into larvae queens with the same efficiency as royal jelly.