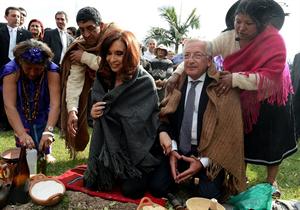 In the midst of the campaign for the primary election on August 11, Cristina Kirchner today traveled to the province of Jujuy where he visited the mill "Hope" in the symbolic opening of the harvest 2013. There, the President made an offering to Pachamama, the most popular of the beliefs of the native peoples of Latin America. Note the Daily Nation 01 / August 2013.

Judge for yourselves, one Head of State kneeling on the floor worshiping Pacha Mama. An American ancestral deity, representing the old "Mother Earth".


The Lady President made an offering of food and drink (drink offering) that were poured into a hole in the ground. It is an act of worship to created things removing glory to the Creator:

18 For the wrath of God is revealed from heaven against all ungodliness and unrighteousness of flesh and blood, who by their wickedness suppress the truth. 19 since what may be known about God is plain to them, because God has shown it. 20 For since the creation of the world his invisible attributes, namely, his eternal power and divine nature, have been clearly perceived through what has been made, so that men are without excuse. 21 Although they knew God, they neither glorified him as God nor gave thanks to him, but futile in their speculations, and their foolish hearts were darkened. 22 Although they claimed to be wise, they became fools 23 and exchanged the glory of the immortal God for images made to look like mortal man and birds and animals and reptiles.
24 Therefore God gave them over in the sinful desires of their hearts, which lead to sexual impurity for the degrading of their bodies with one another. 25 They exchanged the truth of God into a lie, and worshiped and served created things rather than the Creator, who is blessed forever. Amen.
Romans 1.18 - 25 NIV.

It's bad public an act of idolatry, because it encourages the people ignorant of the Word of God to do the same.