STUDY.The Star, the Magi and Jesus. By Fabian Massa 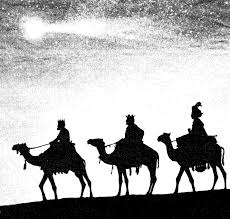 Visit of the wise
It has the Bible that after the birth of Jesus in Bethlehem [1] came about from the East Wise. These learned men were skilled in astronomy and were not believers. But they saw a great sign in heaven, a star appeared and they were convinced that a unique event was about to happen: The birth of a King. So they set off, following the path of the star, hoping to reach the country where born so important king. In the tradition of the Church out of the East (Iraq? Iran?). According to studies scholar Ratzinger, Pope Benedict XVI, who says in his latest book, The Childhood of Jesus, the Magi departed from somewhere in the old Tartessos (Andalusia, Spain) and East [2].

Beyond whether it was in Andalusia or Iraq, the fact is that both are long and expensive travel. When they arrived in Jerusalem, asked where was the King of the Jews had been born. They did not know the Word (were pagans) and therefore unaware of the prophecy of Micah 5:2 that religious Jews were revealed:


"'But you, Bethlehem, in the land of Judah,
by no means least among the rulers of Judah;
for out of you will come a ruler
who will shepherd my people Israel. "

The Sages pagans believed the prophecy and went quickly to Bethlehem and witnessed Jesus worshiped him and departed again to their land. (What a long trip just to be a few minutes in the presence of God!)
Important details:
1. The religious Jews who knew the prophecy had not given heed to the signs of heaven, and that could be seen from far away (and therefore visible for ALL) Also, once they knew of the star and not knowing the Scripture accompanied the Elders to ascertain whether or not there was born the Messiah. A lack of total disinterest.
Two. Herod wanted to kill the child if this was born. But neither take the trouble to accompany the wise.
Three. The people saw the sign in heaven and did not react.

How can you be so indifferent to the religious?

Conclusions:
A religious who have their eyes only on the letter of Scripture and they look up to understand the times, they are going to pass up as happened in Bethlehem.
Ordinary people do not see the signs or understand the times, because the religious, who are the ones who have to teach and preach, they are busy in their religiosity.
Finally, stay tuned connoisseurs (believers or not) are the tenfrán the opportunity to witness the coming of Christ, as it is prophesied:
16 For the Lord himself shall descend from heaven with a shout, with the voice of the archangel and with the trump of God: and the dead in Christ shall rise first. 17 Then we who are alive, who are left, shall be caught up together with them in the clouds to meet the Lord in the air. And so we will be with the Lord forever. 18 Wherefore comfort one another with these words. 1 Thessalonians 4.16 - 18 NIV.

Do not stay out! Week 70 is about to begin. Only Jesus saves.