NEWS. The defense industry made ​​fuel to the fire of war in Syria.


Shortly after the European Union (EU) announced the lifting the ban on arms sales to the Syrian rebels, Russia justified anti-aircraft missile delivery Damascus regime, meaning that the provision of arms to the rebels is the preamble to a joint action of NATO to intervene in Syria. In this way it is once again reviving the old spirit of the "Cold War" of the mid-twentieth century.
Syria is going through a civil war and has over two years and 100,000 dead. Some cities have suffered great destruction as the case of Homs. 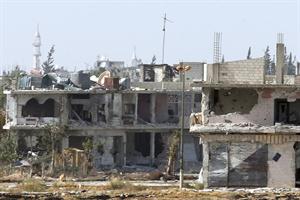 The whole region is volatilized, because in reality they are facing the two always blocks: West-Capitalism vs. East-Socialism. Islam wants to gain ground hard and prepared for their mission: Delete Israel off the map. But God is with Isarel and hold to Jerusalem.